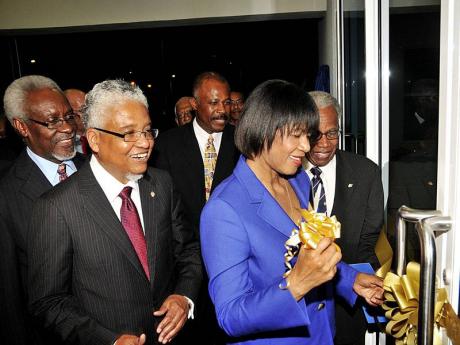 The University of the West Indies (UWI) and the Caribbean Community on Wednesday celebrated the official opening of the first UWI Headquarters Building by Prime Minister Portia Simpson Miller.

The building, situated across from the Mona campus of the UWI, houses the Vice Chancellery, the central administrative arm of the University's four campuses - Mona, St Augustine, Cave Hill and the Open Campus.

Commonly referred to as the 'Centre', the Vice Chancellery, which previously operated out of facilities at UWI, Mona, since its establishment in 1947, focuses on areas like policy, planning and development, interface with governments, quality assurance, generation of funding and maintenance of UWI's international linkages.

The new building houses the units of the Vice Chancellery previously located in various overcrowded buildings across the Mona campus and elsewhere, and is expected to facilitate more cohesive administration and management of the UWI.

The other units of the Vice Chancellery, teaching and research centres, are located across the four UWI campuses.

The vice chancellor noted that a museum on the ground floor of the UWI Headquarters Building "will feature both permanent and visiting exhibits of art from the region", as a complement to the ongoing expansion in academic and research programmes at the UWI and the institution's critical role in national, regional and global development.