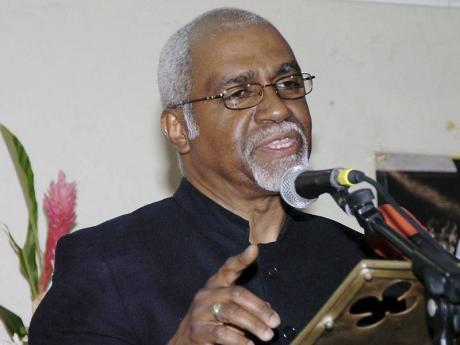 A PROMINENT Jamaican official with vast international influence has joined the call for the Jamaican Government to close the door firmly on the Westminster system of governance, headed by the Monarchy and the Privy Council that he described as the trappings of a stubborn colonial grip on the country.

"Let us not be diverted by those who, in advancing the facile argument that relinquishing these two symbols 'can't put food on the table', say that there are more important social and economic issues to which Jamaica must attend," Patrick Robinson, judge of the International Criminal Tribunal for the former Yugoslavia and former president, declared.

Ironically, it was in the monarchical hub of United Kingdom that Robinson issued the call to sever colonial ties with the old systems as he weighed in on the raging debate.

In retracing the horrific path to which the ancestors, including many Jamaicans throughout the periods of slavery, were subjected, Robinson argued that the replacement of "ancient symbols" is an issue that goes to the identity and self-image of Jamaicans.

"... As such, this is anterior to and transcends all other issues; indeed it is the basic, fundamental issue in Jamaican society," the veteran judge declared in a speech titled: 'The Monarchy, Republicanism and the Privy Council: The Enduring Cry for Freedom'. "We are not in an 'either or' situation."

Robinson contended that it was 'entirely wrong' to suggest that Jamaicans can't take the steps to relinquish these two symbols, and at the same time adopt measures necessary for their social and economic advancement.

Stressing that Jamaica should continue to have a productive relationship with the United Kingdom, Robinson noted that more than half a million Jamaicans and their descendants make this country their home - but stressed that the relationship should not be one in which the British monarch is Jamaica's head of state.

"As a republic within the Commonwealth, Jamaica and the United Kingdom will continue to develop their relationship for their mutual benefit," said Robinson.

He said the benefit that is usually associated with the Monarchy is the perceived stability and certainty that it is said to provide: the Monarchy remains while governments change. "It is not clear to me that if Jamaica has enjoyed political stability in the last 50 years - and a fair comment must be that it has - that this can be attributed to the British Monarchy," he argued.

"There is no reason to believe that the current level of political stability in Jamaica would not continue under a republican system of government.

Noting that some Jamaicans continue to oppose the move to relinquish ties with the Privy Council, Robinson said, "The explanation for this opposition is the feeling that we are not good enough and cannot be depended on to be just and fair and deliver justice in the way that an English court can."