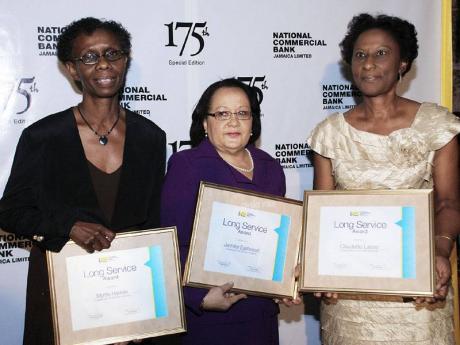 Employees who have given 40 years' service to the National Commercial Bank, from left: Myrtle Hennie, Jennifer Eastwood and Claudette Latore display their awards. - photos by Colin Hamilton/Freelance Photographer 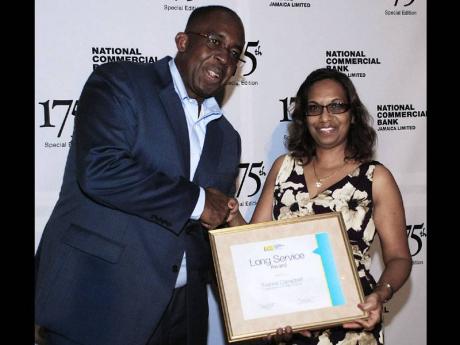 Yvonne Campbell receives an award for 35 years' service to the National Commercial Bank, from her boss Patrick Hylton. 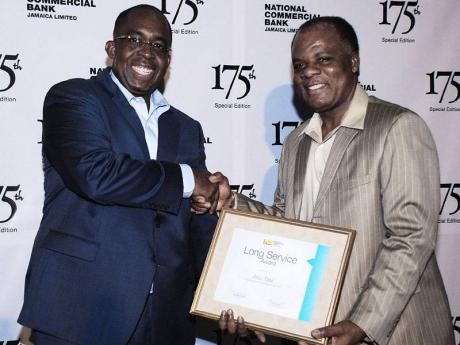 Alric Tate (right) has served the National Commercial Bank for 35 years. Here, he receives his award from Patrick Hylton, group managing director of the bank.
1
2
3

As a noted employer of choice, the National Commercial Bank Jamaica Limited (NCB) has seen many employees spending the greater part of their working years at the institution. The stories of Myrtle Hennie, Jennifer Eastwood and Claudette Latore are prime examples of this. They celebrated their 'record time' of 40 years at the company's Long Service Awards, hosted at Usain Bolt's Tracks and Records on Tuesday.

"After 40 years, NCB is simply my home away from home," expressed Myrtle Hennie, human resource officer at the NCB Corporate Learning Campus. "I started working here when I was 16 years old, when NCB was the Barclays Bank. She reminisced, "Back then, the bank was very different. I remember thinking that this was such a 'big bank with a well-lit banking hall' and, of course, colour was important as back then most of the staff members were white," Myrtle reminisced. "Working at a bank brought such prestige, because it meant you were a qualified individual."

Claudette Latore, former operations manager of the centralised disbursement and securities unit, started working with the bank at age 18 and so her initial perceptions were a bit jaded. "When I began working at NCB, I thought the atmosphere was too impersonal and I felt a bit lost and out of place. This quickly changed as I found that staff members worked as a team and we became close friends rather than just co-workers. I learnt the importance of fostering close bonds as I was charged with the task, on several occasions, to groom new employees in the areas of deportment, work ethic and general behaviour, a task which helped to shape my character as well."

As former operations manager at NCB Half-Way Tree, Jennifer Eastwood is very passionate about the institution to which she has devoted many years of her professional life. "One thing I can definitely attest to is the resilience of NCB," expressed Jennifer confidently. "I remember, to this day, the merger between NCB and Mutual Security Bank (MSB). Change is never easy, especially when you are not only merging two companies, but also the culture and processes of both banks, which are completely different. To facilitate the transition, team members had to be retrained in all areas. Fortunately, it was a seamless process as the necessary support was put in place."

In retrospect, Claudette is grateful for the invaluable life lessons learnt over the many years and lauds NCB for the indelible mark it has left on her as a person. "My journey has taught me patience, endurance and the ability to effectively relate to different personalities," said Claudette. "I don't believe I would have had the opportunities that I have been afforded if I worked elsewhere. "

Similarly, Jennifer gives high praises for all that NCB has allowed her to achieve. "NCB believes in setting high standards and affords opportunities for training, growth and advancement of future leaders," Jennifer stated. "The past 40 years have been enriching for both my personal and professional growth."

As NCB celebrates its 175th year, Myrtle shares, "The bank has grown much bigger and it gives me pleasure to know that it is fully Jamaican owned. I am happy that I was able to work on monumental projects that will be around long after I have left NCB, such as transforming an empty new building into a University Council of Jamaica-accredited Corporate Learning Campus.

As NCB hosted its annual Long Service Awards at Usain Bolt's Tracks & Records, the strength and tenacity of 430 staff members were acknowledged, a 120 per cent increase over last year's numbers.