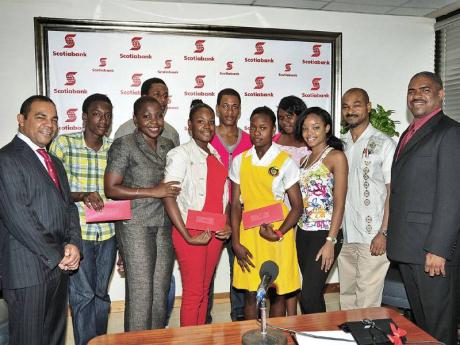 "Why does my back look that way?" "How did this happen?"

These are among the first questions that come to the minds of youngsters when they first notice their backs beginning to change shape. For many families, when the diagnosis is first heard, there is distress at the thought of never being able to afford to do something about it.

In a few weeks, however, the lives of seven young Jamaicans who have had to confront these questions will be changed when they undergo surgery at the Kingston Public Hospital (KPH), as part of the Scotiabank Foundation's Scoliosis Care programme.

The surgery lasts sometimes up to 12 hours, but when they emerge from the operating theatre, they will be on the way to experiencing life as never before.

Natasha Reid, Lacy-Ann Pyke, Anthony Brooks, Shana-Kay Green, Sheldon McPherson, Georgina Mills, all between the ages of 14 and 17 are this year's beneficiaries and met each other at a brief ceremony at Scotiabank's headquarters on Tuesday.

They were selected based on the severity of the condition, length of time on the waiting list, age, and ability to afford to cover the cost of the surgery.

"Young people affected by scoliosis experience a number of issues including severe pain, disruption in their education and other social challenges. The cost of surgery is highly prohibitive. Since 2008, we have assisted some 32 persons by funding the corrective surgery at the KPH," explained Joylene Griffiths-Irving, executive director of the Scotiabank Foundation.

Each surgery costs up to $500,000 and the hospital has a waiting list of between 120 and 150 persons at any given time. Surgeries are scheduled during the summer holidays in order to allow recovery and recouping before school reopens in September.

Each patient requires between 15 and 22 pedicle screws, each of which costs between US$300 (J$26,700.00) and US$350 (J$31,500). The supplier is Medical Technologies Limited, headed by Winfield Boban who, at the ceremony, explained that the screws are supplied at cost price in support of the work of the Scoliosis Care programme.

Scoliosis is a condition where the spine curves either extremely to the right or left as people age. The condition is hereditary and it is estimated that some 90,000 Jamaicans, including Usain Bolt, are affected by the condition at varying degrees of severity. Surgery, for severe cases, requires fusing the vertebrae together and holding them in place with special screws so that the spine can continue to grow, but without the deep curve.

"Depending on the circumstances of the individual's condition, in some cases it is best to have the surgery as early as possible, but there are so many people who simply cannot afford it, and in fact are on waiting lists for years. The list of persons in need of surgery increases each year, so we are inviting persons and organisations to also support the Scotiabank Foundation or to contact KPH directly," said Dr Ian Neil, head of orthopaedics at the KPH, who has partnered with Scoliosis Care since inception.