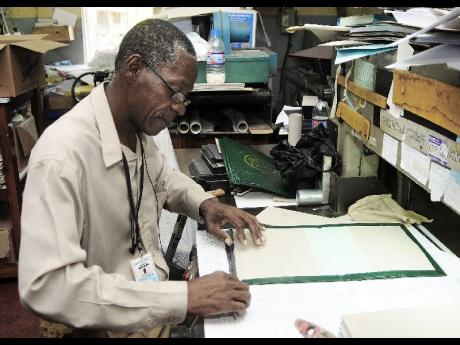 One could easily judge a nation by the way it treats its most vulnerable citizens. Among them are the elderly, children and the physically challenged, and Earl Thomas believes Jamaica has failed that group.

A paraplegic, Thomas knows only too well the challenges of the disabled community. The owner and managing director of Prestigious Bindery and Printery, he says he has seen enough instances of discrimination against persons with disabilities to form that opinion.

"People tend to equate your ability with your disability," he said.

Operating from the state-run Sir John Golding Rehabilitation Centre, a hospital that caters to persons with disabilities, Thomas has seen first-hand what this discrimination can do to the disabled person. He says most of the centre's patients are there as a result of motor-vehicle accidents, hence their struggles with depression as they try to adjust to their new circumstances.

"They become suicidal when they can't provide for themselves and their families," he said.

That is why the businessman has made it a priority to employ persons from the disabled community. Half of his staff of 12 are physically challenged, and Thomas said it is his way of ensuring they are able to provide for themselves and their families.

Using the knowledge gained from his near 20-year stint at the University of the West Indies Printery and a three-year certificate in printing services, he also teaches the book-binding business to several residents of the centre, as well as to summer workers.

"I don't believe in the handout ting," he staunchly declared. "Create opportunities so that people can work … our politicians pay lip service to changing things for people."

But Thomas' realities are no different from many other business operators who have seen a decline in revenue in an austerity-driven economy.

"Things become challenging sometimes", and Thomas has had to rotate his staff, "just so everybody gets a little piece of the pie".

"Sometimes it really pains my heart when I have to ask them to go home," he said.

Thomas also hopes to overcome the hurdle of securing financing to expand his business, which he says will also meet the growing needs of his physically challenged members of staff.

I think I've outgrown this little building here … and because some the workers use wheelchairs, it's very problematic when they try to manoeuvre this little area here."

According to data from the Ministry of Health, there are approximately 250,000 disabled persons living in Jamaica, less than two per cent of whom are meaningfully employed.

It's why Thomas is appealing for policymakers and corporate Jamaica to address the plight of his "physically challenged brothers and sisters" and for empathy from Jamaicans in general.