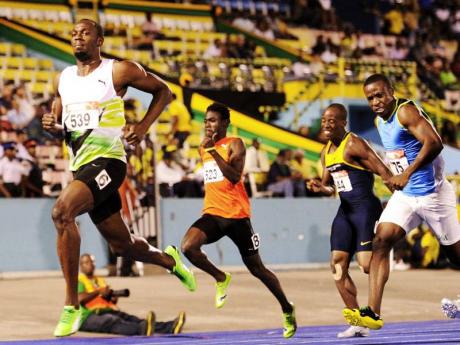 The faithful spectators who turned out for yesterday's opening day of the JAAA Supreme Ventures National Senior Championships at the National Stadium held their breath in unison, as the starter called back heat one of the men's 100 metres suggesting someone had false-started and would be disqualified.

With the defending Olympic champion and world record holder, Usain Bolt, present in the race and the memory of his false start and eventual disqualification at last year's World Championship final still fresh in the minds of many, fans feared the worst.

There was much relief when it emerged that it was in fact Ainsley Waugh's 2012 100m Olympic dream that had ended.

The reigning World champion, Yohan Blake, got off to a good start in his quest to qualify for his first-ever Olympics and recorded the fastest time going into today's semi-finals.

The 'Beast', as Blake is dubbed, looked impressive in winning heat two of four. The Racers' Track Club athlete stopped the clock at 10.00 seconds (w/s +0.8) to finish ahead of clubmate Kemar Bailey-Cole (10.12) and former national champion out of Akan Track, Oshane Bailey (10.26).

It was an MVP clean sweep in heat three, as defending national champion Asafa Powell and Nesta Carter both crossed the line in 10.19 seconds (w/s +0.2), but Carter was deemed the winner. Nicholas Watson was third in 10.23 seconds.

"I just wanted to get the first four steps out of the way and keep my focus for the next 20 metres; it was a good run," Powell said of the race.

The final heat saw Michael Frater chase down the fast-starting Lerone Clarke to take victory in 10.09 seconds (w/s +1.3). Clarke crossed the line in 10.15 seconds to finish ahead of Racers' Kenroy Anderson (10.24).

In the women's 400m, MVP athlete Christine Day emerged as the fastest qualifier for the semi-finals which is scheduled for tomorrow at 7:15 p.m. Day stopped the clock at 51.50 seconds to take heat three with Domonique Blake placing second in 51.94.

On the men's side, national record holder Jermaine Gonzales was the fifth-fastest qualifier after winning heat three in 46.39 seconds.

Walker dipped below 55 seconds for the second time this year, as she stopped the clock at 54.88 to win heat two and progress as the fastest qualifier. Shevone Studdart was second in 56.09 seconds. Josan Lucas out of Trinidad and Tobago placed third, but is not eligible to compete in the final.

Holmwood Technical's Janieve Russell ran a career-best 57.04 seconds, which is the best time by a junior this year over the distance to place fourth ahead of Ristananna Tracey (57.92).

The male equivalent saw Josef Roberston lead all qualifiers into tonight's final. Roberston took heat one in 50.03 seconds. Also advancing from the first heat was Roxroy Cato, who was second in 50.09 with former national champion Isa Phillips (50.21) claiming third.

The other three men to advance to the final came from the third heat which was won by Trinidad and Tobago's Emmanuel Myers, but he will not feature in the final being a guest athlete. The three to progress were Brian Steele (50.14), Adrian Findley (50.24) and Sabriel Anderson 50.26 seconds.

Yesterday's lone final , the men's javelin, was won by G.C. Foster's Jeffery King with a throw of 60.35 metres. Robert Barnes (54.83m) placed second ahead of Demoy Henry (54.56m). None of the competitors, however, have achieved the A qualifying standard of 82 metres or the B standard of 79.5m.