Another draw, national title set to be shared 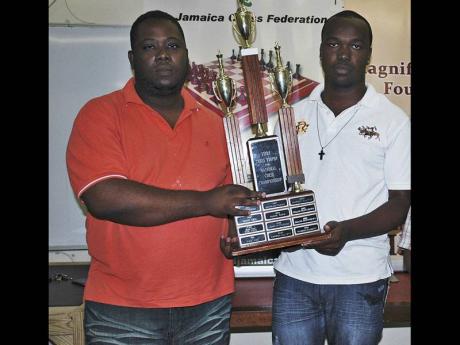 The long-awaited blitz play-off to determine the single title holder for the 2012 National Chess Championship was held last weekend at the Magnificent Chess Foundation offices.

But alas, the play-off between defending champion NM Damion Davy and NM Andrew Mellace ended in a 3-3 draw, which now apparently forces the title to be shared, based on the Jamaica Chess Federation rules.

The R&D Chess Showdown ended in sparkling form last weekend. It was a fairly large tournament attracting more than 200 children. The tournament featured students from more than 15 prep/primary schools within the Kingston & St Andrew and St Catherine areas, all vying for prizes within their age groups.

Students from R&D chess schools Alvernia Prep, Immaculate Prep, Lannaman's Prep & St Richard's Primary faced off to determine the top R&D student and the top student in each grade. The winner of this section was Amani Cooke of St Richard's Primary, who ended on a perfect six points from six games.

Perfection was also seen from Malik Buchanan of St Andrew Prep who topped the Invitational Section also with six points, while the top invited girl's prize went to Rochelle Porter of Queen's Prep. The Capture the King Challengers Section, a brand new tournament concept which was added for R&D students who had recently learnt the game, saw a three-way tie among Abygail Squire of Lannaman's Prep, Linval Howard Jr of St Richard's Primary, and Breanna Crooks of Alvernia Prep, all students, ended on 7 points from 9 games.

There was also a two-way tie for top coach which was shared by coach Palmer from Chess Enterprise & NM Mikhail Solomon of Royale Chess Academy.

President of the Jamaica Chess Federation, attorney-at-law Ian Wilkinson, left Jamaica this week for Lausanne, Switzerland, to sit on the Ethics Commission (EC), the disciplinary arm of FIDE, the World Chess Federation.

Issues to be dealt with at this sitting include a complaint against Frenchman Sebastien Feller regarding allegations of cheating at the 2010 World Chess Olympiad in Russia. The EC will also be examining the decision by the Turkish organisers to exclude arbiters from a number of high-profile chess countries (including England, France, Germany, Ukraine and the USA) from officiating at the 2012 World Chess Olympiad scheduled for Istanbul, Turkey, between August 27 and September 10, 2012.

Known as the 'World Chess Court', the EC is chaired by Italian Supreme Court judge Roberto Rivello. Wilkinson first sat on the EC in July 2007 in Athens, Greece, when it dealt with a number of cases including the famous 'toiletgate' case arising from the 2006 world championship match between two former world chess champions, the Bulgarian grandmaster Veselin Topalov and the Russian grandmaster Vladimir Kramnik.

July 7 and 8: The St Jago Chess Open 2012 at the St Jago High School. Details and registration on website chess.stjago.com.