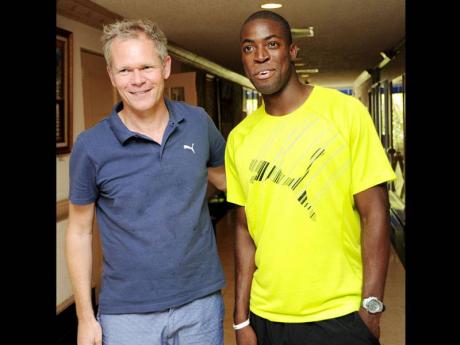 Riley, a four-time NCAA champion at 100m, 110m hurdles and 60m hurdles, became the first athlete in history to win national titles in the 100m and 110m hurdles in the same year.

"I am privileged to have signed this deal with PUMA. Their involvement with Jamaica runs very deep, their support at the grass-roots level to their partnership with the Olympics delegation means PUMA is very much liked on this island. I also like their style," Riley told The Gleaner yesterday.

"I'm feeling pretty great, it's a great transition for me; the end of one chapter and the beginning of another," added Riley, who has one remaining semester at the University of Illinois.

Christian Voigt, PUMA's senior head of Global Marketing, was equally excited about the partnership and underlined the athlete's attitude and impressive performances as his calling card.

"We are always for exciting talent to showcase our brand, and Andrew Riley has really interested us with his performances and attitude over the last two years," said Voigt.

"His form over the past few months has been particularly impressive and we're sure there's a lot more to come from this young man. We're very happy to have him with us," Voigt further noted.

Riley, considered to be one of the leading sprint hurdlers in the island, will go up against the likes of national record holder Dwight Thomas and the ever-improving Hansle Parchment in the 110m hurdles at this weekend's JAAA/SVL National Senior Championships inside the National Stadium.

The youngster is looking forward to this week's showdown and believes it represents an important step in his professional development.

PUMA has long been associated with Jamaican track and field and is the main sponsor of the Jamaica Athletics Administrative Association and the Jamaica Olympic Association, as well as top athletes Usain Bolt, Jermaine Gonzales and Ristananna Tracey.