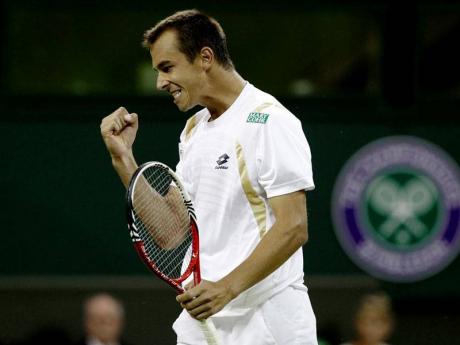 Rosol, a 26-year-old Czech ranked No. 100, earned the biggest win of his career playing in Wimbledon's main draw for the first time. He lost each of the past five years in the first round of qualifying.

As the match stretched beyond dusk, the conclusion came with the retractable roof closed for the final set on Centre Court. The upset on tennis' biggest stage was no fluke: Rosol served brilliantly and repeatedly stepped instead the baseline to hit aggressive groundstrokes, while Nadal found himself pinned deep and on the defensive.

Nadal saved three set points to win the opening set, but his demeanour grew glum as Rosol overtook him. After falling behind in the third set, Nadal grumbled to the chair umpire during a changeover, apparently irritated by Rosol's movements as he awaited serves.

Two games later, Nadal bumped into Rosol - and didn't acknowledge the contact - as they walked to their chairs for a break.

Rosol exhaled before hitting his final shot, which was his 22nd ace. He fell to his knees, arms up, then collapsed face down on the grass. He then rose and shook hands at the net with a frowning Nadal.

Rosol became the lowest-ranked player to defeat Nadal in a major tournament. The 6-foot-5, 178-pound Czech lost only 16 points on his first serve, returned well and won 22 of 28 points at the net.

In short, it was a complete performance that had spectators wondering why they'd never heard of him before. Nadal lost despite committing only 16 unforced errors in 276 points.

The Spaniard had reached the final in the past five Grand Slam tournaments, and had played in the final of his past five Wimbledons.

It was a good day for Americans - Serena Williams, Andy Roddick, Mardy Fish and No. 126-ranked Brian Baker advanced, as did No. 28-seeded Christina McHale and Varvara Lepchenko.

The No. 1-ranked Sharapova saved five set points in the first set and led the second set 3-1 when play was halted Wednesday because of darkness. She lost the first two games when the match resumed, and double-faulted on her first three service points in the tiebreaker.

"It felt like two matches in a way,'' Sharapova said. "Today, I wanted to start off really well because I knew I was up a break. Didn't go according to plan. Really served sloppy.''

Sharapova underwent shoulder surgery in 2008 and has been prone to double-faults, but in the final set she had no trouble with her serve - or anything else. She won 21 of the last 27 points and finished with just 11 unforced errors.