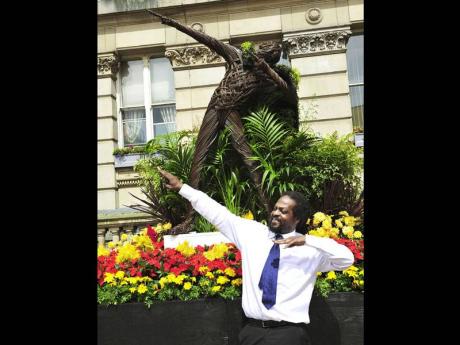 Anthony Reece tries out his 'Bolt pose' by the wicker statue outside Birmingham's Council House in Victoria Square, England. - Contributed

THE fastest man on the planet, Usain Bolt, is 'blooming' in the heart of Birmingham - thanks to a life-size wicker figure which has formed the centrepiece of a magnificent floral display.

With just days to go until the man himself will be staying in the city at the Jamaican track and field team's pre-Olympic training camp, Birmingham City Council's award winning gardeners have created the famous Bolt victory pose out of wire and steel.

BLAZE OF red, gold and green

It now stands outside Birmingham's Council House in Victoria Square, among a blaze of colourful red, gold and green plants, complete with a floral Jamaica flag about to burst into bloom over the back of the figure.

The floral display 'Best of Birmingham', which features a Mini car and the Bullring bull, and won the parks' team gold at the Chelsea Flower Show earlier this summer, will be on show in Centenary Square and the Bullring.

Anthony Reece, 52, a building surveyor with Birmingham City Council, whose family hails from Montego Bay, said: "As someone of Jamaican heritage, I feel very proud to see Usain Bolt standing proudly in the heart of Birmingham."

Birmingham is playing a key role in the London 2012 Olympics by hosting both the Jamaican and USA tracks and field teams ahead of the games. The city also welcomes the Olympic torch as it passes through the city on June 30 and July 1.

Sharon Lea, strategic director of environment and culture at the City Council, said: "There will be a huge focus on the Olympic training camps in Birmingham and I am delighted that our Chelsea Gold winning parks gardeners are celebrating the city's involvement in the London 2012 Olympics with these unique floral creations."