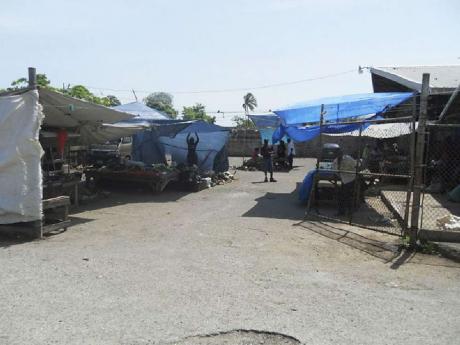 The back gate of the Old Harbour Market, which vendors who sleep in the market on weekends say remains open during the nights. 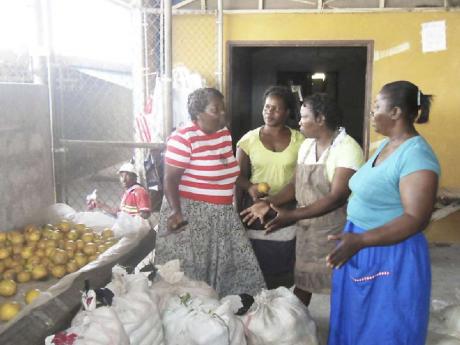 Vendors from left: Icylyn Thompson, Carmen James, Tasmolin Davey and Doreen Morgan discuss their dissatisfaction with the state of the Old Harbour Market. 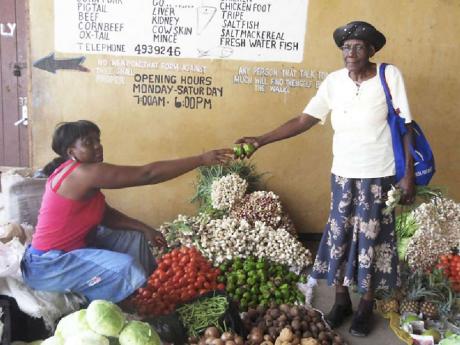 A FORMER dressmaker and vendor for the last 10 years, Karen Thompson journeys from Prospect in Manchester every Thursday evening to the Old Harbour Market in St Catherine to eke out an honest income.

It's a similar situation for Lurline Annakie-Loton, who lives in Kellits, Clarendon, and who has been peddling her wares for more than 25 years. With no other options, the market is the place of abode for both women until they return home on Saturday nights. But their stay at the facility is usually tinged with fear and anxiety.

"There is no proper security, and that's really scary," Thompson, who occupies an area at the extreme back of the market where she displays her goods, primarily consisting of vegetables, on a tarpaulin on the ground, told The Gleaner.

"The back market gate sleep open fi the whole night. We need a security at the gate. People can just walk in here and kill wi off," Annakie-Loton, Thompson's neighbour, lamented.

But even vendors who retire to their respective homes after each day's sales are concerned about the lack of security as they claim that they are subjected to extortion.

"Sometimes di bwoy dem from all over come in and want to take up wi tings. Dem beg wi, and when wi nuh give dem, dem take dem up from wi stall and gone," said a 69-year-old male vendor whose small, wooden stall was half-stocked with sweet peppers, tomatoes, and other vegetables.

Security is just one of the myriad of issues the vendors want authorities to address urgently. In fact, food vendors have refused to occupy the market house. Instead, they display their goods in the market yard.

"We can't sell in here. The stalls are not properly built. They are small and too high. Inside here hot, the light poor. We can hardly see and if anything happen to a vendor or customer on one side, then who round the other side wouldn't know until the person who do the damage escape," vendor, Tasmolin Davey, pointed out as she gave a guided a tour of the building.

Esworth Frankson, councillor, Old Harbour Central division, agreed that adjustments should be made to the facility to appease the vendors.

"I suggested that we knock down the wall at the front and fix up the market properly so that air can come in that the vendors can feel more comfortable," he said.

But the vendors disagree and are calling on the council to listen to their plea.

"Where I sell at the back of the market, the roof leaks, and when rain falls, my goods wet and is not me alone. Overall, the market wants to clean up. Round the back smell bad, and the scent coming from out of the meat house because it lock up and nah use," a vendor, who wished to remain anonymous, said.

And even as some clothing and shoe vendors located at the front of the market expressed the wish for their space to be expanded, they said competing with fish vendors who refused to sell in the designated area had become challenging.

Then, there is also a general concern about the state of the road which leads to the market.

"They complain that whenever it rains, it is in a deplorable condition, and very soon, we are going to repair that road," Scott promised.

The vendors argued that despite suffering discomforts, they were still required to pay an annual registration fee of $2,500, in addition to the daily user fee.

"User fee is $150 per day, but some of them pay $100 per day. So if the vendors come in the market for two days, is $300. We also have a rate where we charge $80, $90, $120 for each bag of orange, or any food stuff like pumpkin," Shirley McCook, market clerk for the last five years, explained, adding that some vendors refused to pay and sometimes verbally abused her.

Doreen Thompson, a 50 year-old vegetable seller, declared that the registration fee should be reduced.