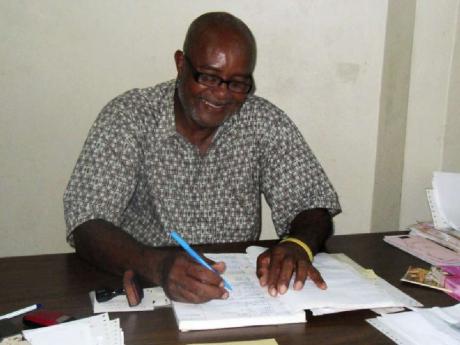 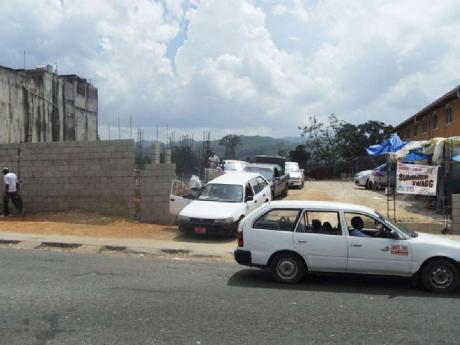 Some taxi operators who ply the Linstead-Bog Walk route who were relocated to Parade Avenue to facilitate construction of the Linstead Transportation Centre have returned to the site on King Street since work on the project stopped in late December, last year. - Photo by Karen Sudu 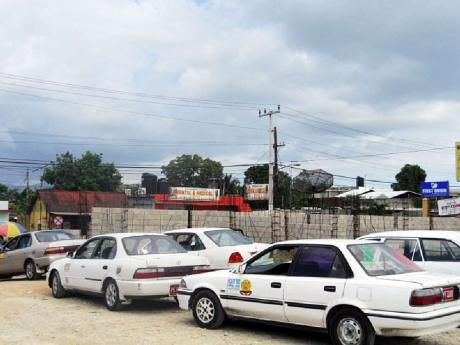 TRANSPORT OPERATORS are unhappy with the delay in the completion of the Linstead Transportation Centre. Work on the $30-million facility funded by the Transport Authority being constructed at the site on King Street, which was being used by minibuses and taxis plying the Linstead to Spanish Town and Linstead to Bog Walk routes, began on December 12 last year.

Isaac Depluzer, president, Linstead-Bog Walk Taxi Association, said while he and his colleagues were excited when the project started, he was doubtful about the proposed completion time they had been given by officials from the former administration and other relevant agencies.

"I was very happy when they started working on the centre - although I thought it was an election fake in terms of how they came out here and told us that they have everything in the correct order, money everything and the centre would be finished within three months. That was March of this year," he told The Gleaner.

He said after work stopped, just before the December 29 general election, he made several enquiries about resumption, but was unable to solicit information.

"I have tried to get the Member of Parliament Hon Robert Pickersgill to tell me what is the position with the centre, but at the time, he was not familiar with what was happening, and he promised me faithfully that he would investigate and get back to me. That is some months now, and he has not replied," said Depluzer.

He added: "I have spoken to (a member) of the St Catherine Parish Council and he informed me that there is some bureaucracy problems with the parish council and the Transport Authority."

But according to Petra-kene Williams, communications manager at the Transport Authority, construction of the facility has not started.

"The parish council started preparatory work by putting in place hoarding to secure the location. However, construction work has not started. The restart date for the work will be announced at a later date," said Williams.

The peeved transport operators who were relocated to Parade Avenue in the heart of the town to facilitate construction of the facility are adamant that work had in fact started. They pointed to what they said were shops being built at the front of the centre.

"They are making the shops at the front of the centre and they suppose to build them along Sinclair Bargain Centre," Jerome Gray, a 68-year-old taxi operator who plies the Linstead-Bog Walk route, claimed.

The transportation centre is bordered by Sinclair's Bargain Centre and Samm's Mall.

"Another thing: This centre needs two exits. You can't have one exit. You should have one for vehicles going to Spanish Town and one for those going to Ewarton, Guy's Hill, and up that side," he suggested.

Like Gray, Derick, in his 40s, has been plying the Linstead to Spanish Town route since 1993. He expressed concerns about the height of the wall being built at the front of the centre.

"The front haffe go lick down. It can't stay so. You can't block we in a place and no know what a gwaan in deh wid we. Man can come in there come rob wi in there. The authorities have fi go start something different a front," he said.

Williams said the Transport Authority is cognisant of the concerns.