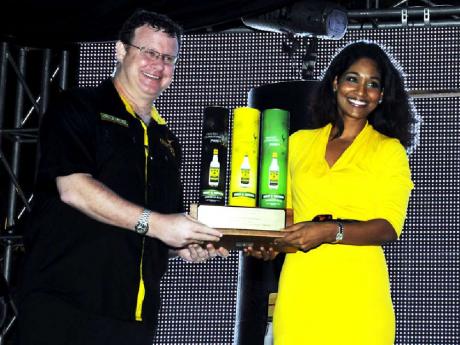 On Tuesday, the manufacturers of the official spirit of Jamaica50, J. Wray & Nephew Limited, presented its gift to Jamaica in this the year of its 50th anniversary.

What was it? Three memorabilia canisters that hold the same high-quality product that is found in the everyday J. Wray & Nephew white rum product.

After a downpour of rain made for a shaky start to the event, Paul Henriques, J. Wray & Nephew managing director, began with an address which spoke of the spirit's history in Jamaican culture and lifestyle before making way for Minister of Youth and Culture Lisa Hanna who voiced similar sentiments.

The commemorative package consists of three canisters, one black, one green and one gold, representative of the colours in the Jamaican flag.

Each canister contains a 750ml bottle of Wray & Nephew White Overproof Rum and will come at no extra charge to the consumer.

Wray and Nephew also revealed another gift in the form of a special cocktail - the Wray & Nephew Independence Punch. It is a modern twist on the traditional Jamaican rum punch recipe.

Gary Dixon, marketing manager at Wray and Nephew, told The Gleaner that the gift of the canisters came after careful and intense deliberation.

"We could have used something that was less durable, but what we thought of was something that someone will have in their liquor cabinet, or on their shelves, for years to come. Even if they finish the product that comes in it, it's something that they'll look on in maybe 50 years from now and say Wray and Nephew was there and that this rum was the pride and the spirit of Jamaica," he said.

He added that the spirit within the J. Wray & Nephew company as Jamaica celebrates 50 has been great.

"I just joined the company four months ago and the energy levels are great. This is a company that truly forms the fabric of what is Jamaica, and Wray & Nephew White Overproof Rum is indeed the spirit of Jamaica. The people here are warm, and they embrace the spirit of Jamaica," said Dixon.