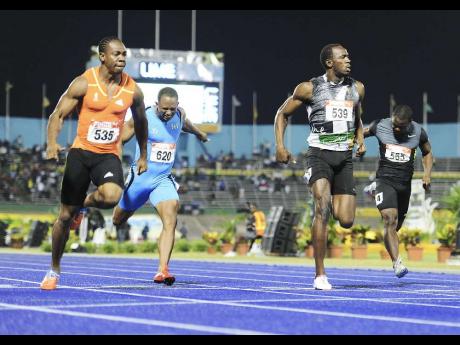 THE TRACK and field world was treated to a feast of fine sprinting as World champion Yohan Blake continued to rubber-stamp his threat to 100m dominance while Olympic champion Shelly-Ann Fraser-Pryce showed her class to take the women's equivalent at the JAAA/Supreme Ventures Limited National Senior Championships.

Usain Bolt is not used to standing on the silver medal podium, but that's exactly where he was during the 100m medal ceremony last night inside the National Stadium, as Blake produced the run of his life, to win in a stadium-record 9.75 and, in the process, hand his training partner his first-ever 100m loss in Jamaica. Blake's time was also a new personal best and the fastest time recorded this year.

Media representatives were denied the opportunity to speak to Blake, who is expected to also feature in today's 200m rounds but Bolt, who, like he has been throughout these trials, was left in the blocks, described the eventualities as "one of those things".

"For me to get left in the blocks was really bad, but it's just one of those things," said a disappointed Bolt, who was clocked at 9.86. "In the semi-finals, the lane seven guy moved and it threw me off and I kept seeing him in my peripheral, so that threw me off.

"In the final, I got left and in a quality field like this, it is difficult to get back," Bolt added.

Asafa Powell, 9.88, who came into the day with a groin issue and complained that it was sore after his semi-final two hours before the final, produced an impressive run to finish in third place and secure the final individual spot to the Olympic Games. Powell had to receive medical attention after the race and was also unavailable for comment.

Fraser-Pryce showed that her finish is just as good as her start, leading from start to finish in the female event with a blistering 10.70 - a national record.

Veronica Campbell-Brown was second in 10.82, with Kerron Stewart third in 10.94.

Fraser-Pryce was ecstatic that she was able to break the national record in front of her home support.

"I have to thank God and my coach (Stephen Francis); what a phenomenal person he is, he believes in us even when we don't believe in ourselves, and I am excited about breaking the national record here in Jamaica. That is something I am excited about," said Fraser-Pryce.