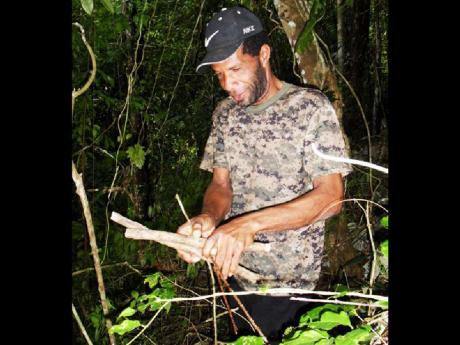 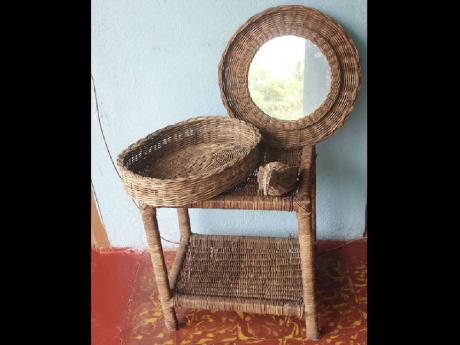 Some of the items made by Peter Watson. - Photo by Nackeisha Tomlinson
1
2

PETER WATSON has been making furniture from wicker for more than 25 years - and he would have it no other way. "The greatest thing about it a when you finish something and people feel excited 'bout it," said Watson.

According to Watson, wicker is the term given to a twig, cane, reed, or vine that is woven or braided to make furniture. He is adept at this skill and can make up to 20 small pieces in a week. He has made baskets, chairs, bookcases, magazine racks, frames, and a map of Jamaica from wicker.

Although Watson is also proficient in cabinetmaking, he is widely known for his speciality: making products from wicker. He was introduced to the skill after he completed school.

"When mi did younger and people know mi a go school a evening time, mi used to go to a workshop and watch some other man work."

Watson said this led him to pursue a two-year apprenticeship stint in Manchester, where he learnt more about making furniture, which included making furniture from wicker.

After his apprenticeship, he worked elsewhere for a number of years, then he returned to Quickstep, which has been his base ever since. In the community, he has helped to facilitate employment for other people who supply him with the raw material.

"Mi have people who mi used to buy the wicker from," explained Watson.

He demonstrated part of the preparation process, which involved harvesting a section of the vine from the vast forest across from his house. Carefully catalogued, original, or modified designs help Watson whenever he is making a wicker item.

The remaining procedure requires that he source the dried wicker. He separates it and puts it into water so it can become flexible for braiding and weaving. He then torches the product with special equipment to keep the weaving in place, then varnishes it. After the process has been completed, minor upkeep is required because wicker items are durable and can last for many years.

Wicker-making has allowed Watson to travel extensively on the north coast.

"Me know a lot of place - and people always want you to build things - like in Ocho Rios, Negril, and Montego Bay."

This is because "people always come for mi fi work, and mi stay all two months", related Watson.

He also had the opportunity to supply a Kingston-based store that specialises in locally made products. Unfortunately, the store has closed, and except for items that are pre-ordered, Watson does not have a steady market.

Watson believes one thing that has contributed to the low demand is the varied choice of furniture on the market. He revealed that over the years, he has harboured thoughts of having a store in Santa Cruz, where he could display his products; however, he has been constrained by the required capital.