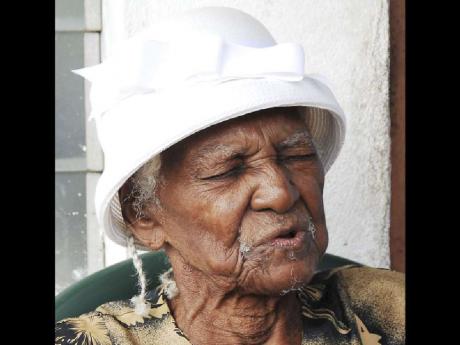 Elizabeth McKnight, a 103-year-old resident of Cameron Hill in St Elizabeth, calls out to God.

Elizabeth 'Lizzie' McKnight of Cameron Hill, St Elizabeth, has a lot to give God thanks for. She has outlived all her siblings as well as her peers.

Aunt Lizzie, as she is affectionately called, was born on May 11, 1909. She is the last of her parents' four children - two boys and two girls. Interestingly, her siblings passed on in the order in which they were born.

She recalled that her parents were predominantly farmers but worked hard so that their children could get a proper education at the Glen Stewart Elementary School.

"In my (younger) days, things were better than now," she declared. "'Howdy' and 'thank you' are not important anymore. The young people need Jesus."

A former Sunday school teacher and board member of the Carisbrook Moravian Church, Aunt Lizzie was taught the skills of dressmaking by her now-deceased sister.

The centenarian has a clean bill of health, reads without the use of eyeglasses, walks without assistance, and hardly misses a word that anyone says to her.

"I am still strong because of the grace of God," she said, beaming with pride as she sang a song of praise, showing off her voice.

"I had one child, but he died at one year and six months," she said as her voice dropped. "I have mothered many, but I lost my child."

Her biggest concern now is the direction the youth of the nation are taking. She believes that only God can save Jamaica.

"The young people need to seek the Lord. They need to place themselves under the banner of Jesus Christ.