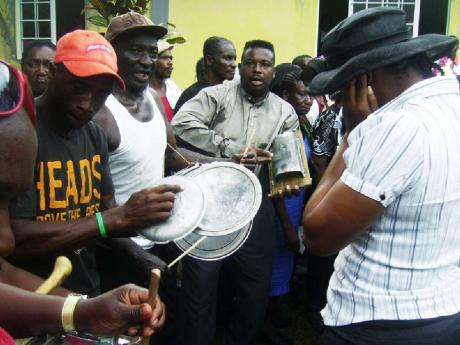 The Heart of Stone Gerreh Group members are in their element at the celebration and thanks-giving service for the life of the Reverend Inez Kirlew on Sunday at the Church of God of the Mountain Assembly, Galloway, Westmoreland. 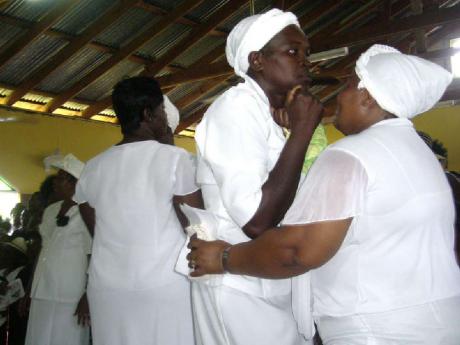 The celebration and thanksgiving service for the life of the Reverend Inez Kirlew at the Church of God of the Mountain Assembly, Galloway, Westmoreland, was full of Revival rituals and emotional moments.
1
2

IT WAS never going to be short. There's nothing brief about a Revival funeral, but the celebration and thanksgiving for the life of the Reverend Inez Agatha Kirlew, née Vassell, at the Church of God of the Mount Assembly in Westmoreland, easily outdid itself on Sunday.

The event, which started with a procession from the road, saw Revivalists and other people from all over the country in attendance at the church which 'Mama Kirlew' pastored for many years. The church, a tent, and the front of the yard were full to capacity, and what a funeral party it was!

The old, young, and in-between, some dressed in ultra-conservative, avant garde, and irreverent outfits, came out in droves, but were they prepared for the long haul?

The programme, which consisted of more than 40 items, was adhered to for the most part, but it went against the script at times. Everybody wanted to heap praises upon Mama Kirlew and remember her fondly; everybody wanted to sing her a song. The lines between a eulogy, a prayer, a tribute, a remembrance, and a sermon were blurred as they all consisted of one or more elements of one another.

Speaker after speaker talked about the upright, decent, god-fearing, no-nonsense, kind, and dedicated woman that Mama Kirlew was. Each tribute was accompanied by one chorus or more, the congregation joining in lustily and spiritedly. Some people got in the spirit and spoke in unknown tongues. Some looked dazed as they sang and danced. The multiple circling of the coffin during the singing and dancing was quite a ritualistic spectacle.

The 'junior department', consisting mostly of mature women, sang and paid tribute to Mama Kirlew as they stood right over her coffin. There were musical selections from various church groups in western Jamaica. Some of them were preceded by a brief tribute and followed by commentaries by the officiating ministers. It was a time of celebration for the woman who died on June 5.

Mama Kirlew was born in Galloway in 1926. She married Isaac Samuel 'Prophet' Kirlew in 1951. They produced two sons and a daughter. Prophet Kirlew was himself a well-known and popular healer and pastor in the community. He died in 1982, after which Mama Kirlew took over his church. But when she got ill in 1994, she, in turn, gave over the reins of leadership to her son-in-law, Joseph Campbell.

Despite suffering four strokes in 17 years, Mama Kirlew didn't give up attending her church, which was built beside her humble home.

But if the atmosphere in the church was celebratory, the one at the graveside was liberating. Led by the Heart of Stone Gerreh Group, from the same area, the singing and the dancing continued around the grave. After the body was committed and the ministers left, it was time for the drums, the grater, and pot covers. And the persons who manipulated them kicked up a Gerreh storm.

Chorus after chorus was belted out. The drawls, the rise and fall, characteristic of Revival songs, filled the air as evening shadows fell. The workmen covering the grave moved with purpose. Buckets of mortar passed from hands to hands, stones were embedded in the wet cement, one layer levelled before a narrower one is encased and built atop it. Onlookers did not budge despite the pleas as the men moved among them. Everybody wanted to see.

There was a poignant juxtaposition of little children looking on in silence at the burial of the elderly. They held on to the headstone of Prophet Kirlew beside whom Mama Kirlew was being buried. Side by side they lie again. In one of the remembrances, it was said when a certain man once proposed to Mama Kirlew after her husband had died, she rolled and laughed, declaring she was going to die a Kirlew.

And while the singing and dancing around the graves were in fervent mode, the feast of cooked food and soup was also on in earnest. When the grave cover was finally finished, candles were placed all around, on the lower level of Mama Kirlew's grave, to guide her home. Just before night descended, the cars and buses from afar pulled out of the district, leaving the residents and her family to come to terms with the absence of Mama Kirlew from their lives.