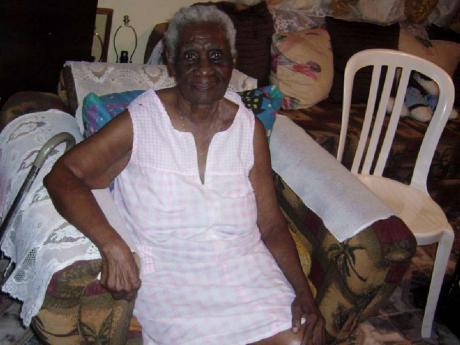 Aunt Evelyn at her house in Portland.

FOR MORE than 45 years, Frances Betilda Graham, affectionately called 'Aunt Evelyn', served in the postal service as a messenger.

Now retired at 89 years old, Aunt Evelyn still remembers the days of having to deliver telegrams on foot to several communities in Port Antonio and beyond.

"I was a walker in those days. Back then, I worked six days per week, and Sunday, as usual, was church day. I had to walk from the Port Antonio Post Office into a numbers of communities including Boundbrook, Breast Works, Prospect, Red Hassle Road, Folly, and other communities in the town area to deliver telegrams. It was fun back then, and as a result of that I made lots of friends."

According to Aunt Evelyn, there were instances when she would arrive at houses in different communities, but no one was at home to accept the telegram. She said that a return visit was made to ensure that the telegram got to its rightful owner in the shortest possible time as in those days telegrams were the fastest means of communicating over long distances.

The mother of five girls, who resides at Stony Hill Road in Portland, said she started working at the post office in 1938 and retired in 1981 due to ill health.

Today, Aunt Evelyn marvels at the improvements in the postal service as no longer do they send telegrams, but instead, technology has replaced the out-dated systems.

"There was a time when a letter would be sent from Port Antonio to Kingston, which took up to three weeks to arrive. But today, it is much quicker, and in 24 hours a person can receive a letter mailed from anywhere in the island," she said.

"Computers are now in place, which allows for the storing of files and data entry. Looking back, I had no problem walking seven and eight miles to deliver telegrams as it was my job to do it. I had to walk as there was no other means of transporting those telegrams to community residents."