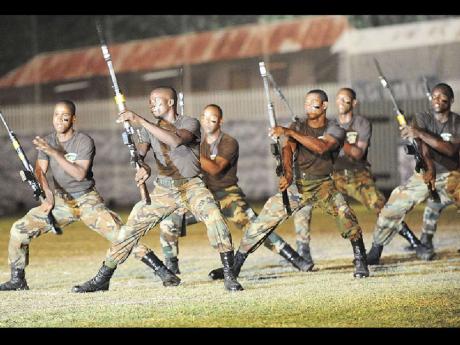 Rifles at the ready! Members of the JDF show their dexterity with their best friend - their rifle. - Photo by Ian Allen/Photographer 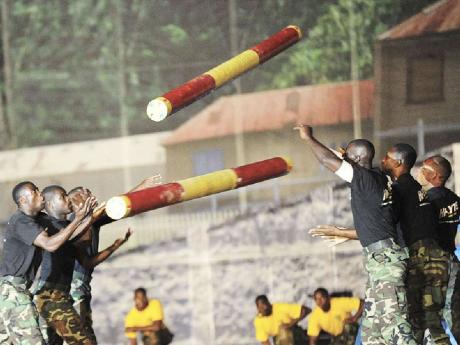 Members of the Jamaica Defence Force (JDF) show their strength by tossing logs back and forth at the Jamaica Military Tattoo at Up Park Camp on Thursday. - Photo by Ian Allen/Photographer
1
2

IT WAS an appreciative audience that left Up Park Camp on Thursday night after watching the opening show of the Jamaica Military Tattoo 2012.

The Jamaica Defence Force's (JDF) Polo Field at Up Park Camp became a parade ground for the execution of marches, physical training drills, rescue demonstrations and for enjoying the musical prowess of the various groups. The background for the performance area was a giant backdrop of the army's Newcastle training ground.

Arguably the most cheered non-musical offering was the Guyana Defence Force Paratroopers, who had everyone gasping as, at times, they seemed destined to crash into each other after bailing out of JDF helicopters about a mile above the ground. Smooth landings followed their air acrobatics. Aside from the JDF, the Jamaica Constabulary Force and Island Special Constabulary Force thrilled with their bike stunts; the all-woman drill team brought smiles, especially to the men; and the Jamaica Fire Brigade all did their part.

The audience was really into it, shouting jokes at the happenings. When the combined JCF and JDF staged a hostage rescue simulation with no shots fired, one man shouted, "Not even one shot? nobody nuh dead?" evoking laughter from those around him. Among the foreign favourites were the British Armed Forces' Royal Marines Band who evoked loud applause for their nano-second perfect timing in their drumwork. The Trinidad and Tobago Defence Force (TTDF) Steel Orchestra had the crowd whooping at their gyrations, the soldiers currying favour with a rendition of Marley's One Love to boot.

The Grand Finale involved all 850 participants, performing in unison. Most patrons The Gleaner spoke with were delighted at the spectacle, but expressed hope the next tattoo wouldn't take 29 years to come.