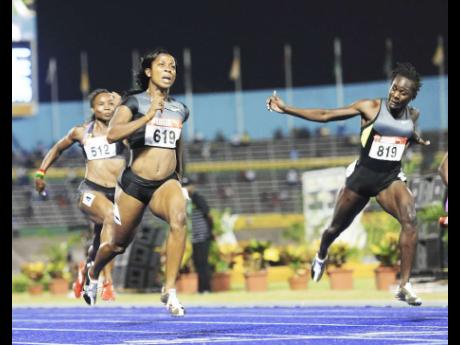 Olympic champion Shelly-Ann Fraser-Pryce breaking her own national record to win the women's 100 metres title on day two of the JAAA National Senior Championships at the National Stadium last night. Fraser-Pryce clocked 10.70 seconds to erase the 10.73 she set at the World Championships three years ago in Berlin. 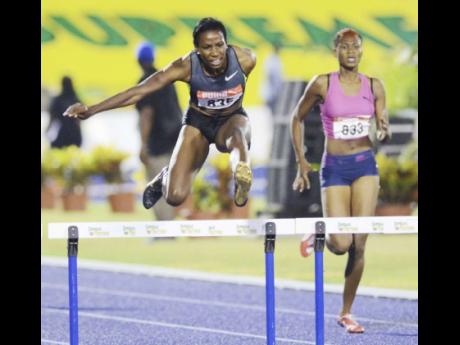 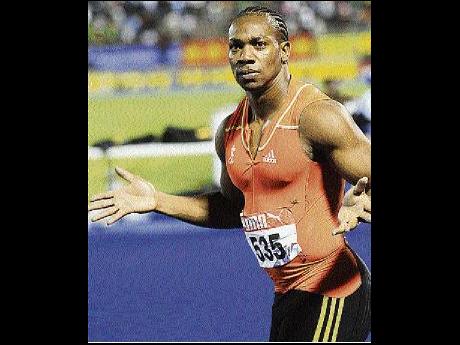 Yohan 'The Beast' Blake celebrates after he lowered the colours of world record holder Usain Bolt in the men's 100 metres final on day two of the JAAA Supreme Ventures National Senior Championships at the National Stadium last night. Blake clocked a personal-best and world-leading 9.75 seconds to take the national title ahead of Bolt (9.86) and Asafa Powell (9.88).
1
2
3

Shelly-Ann Fraser-Pryce sent shivers down the spines of female sprinters around the world as she broke her own national record with a superb run of 10.70 seconds (wind/speed +0.6 metres per second) to claim the women's 100 metres final on yesterday's second day of the four-day JAAA Supreme Ventures National Senior Championships at the National Stadium.

The pocket rocket scorched the stadium's blue track from start to finish, as she raced to a world-leading time, erasing her own mark of 10.73 seconds and bettering the previous year's best of 10.81 which was held by American Carmelita Jeter.

The reigning Olympic champion was followed home by Veronica Campbell-Brown, who posted 10.82 while Kerron Stewart claimed third in 10.94.

It was then time to unleash the 'Beast', as Yohan Blake ate up the track to set a new stadium-record and personal-best 9.75 seconds (w/s +1.1mps) to claim the men's 100 metres final. The World champion time is also the fastest over the distance in the world this year, bettering Usain Bolt's 9.76 clocking back in May.

After an extremely poor start, reigning Olympic champion and world record holder Bolt had to power through the field for second, just clipping Asafa Powell on the line.

Bolt crossed the line in 9.86 to Powell's 9.88, with the latter having to be stretchered off the track at the end of the race.

Walker went below the 55-second barrier for the third time this year, as she crossed the finish line well ahead the rest of the field in 54.77 seconds.

The 29-year-old is now looking forward to the London 2012 Olympics, which is less than a month away, and though not making any promises, she intends to give it her all.

"I don't want to say too much obviously because I don't like to make promises or anything like that but you know the competitor I am and I always show up and I hope to do that all the time," Walker shared with The Gleaner.

The men's equivalent saw Leford Green successfully defend his national title for the third consecutive year, as he got the better of pre-race favourites Josef Robertson and Roxroy Cato.

"I'm looking forward to London, working hard because it has been a trying season, so I am really motivated now to keep it going," Green said. "I just have to keep on listening to my coach and keep on working on my hurdling technique before and after the hurdles, keep my strides going and do not panic," he added.

The first event of the day, the men's triple jump, was won by Wilbert Walker with a best of 15.94 metres. Walker, who is currently the island's top triple jumper, has not yet achieved the A (17.20m) or B (16.85m) qualifying standards for the Olympics.

Allison Randall is poised to be the first woman to represent the nation in the discus at the Olympics since 1984. She bettered the B standard of 59.5 metres with her throw of 61.21 in March of this year.

The national record holder, who came into last evening's event as the heavy favourite, obliged by winning with a throw of 55.92 metres.

St Jago schoolgirl Kellion Knibb set a new national junior record as she placed second with a distance of 51.02 metres, while Edwin Allen's Daniel Thomas placed third with her mark of 50.44m.

Thirteen finals are slated to be contested today, including the men's and women's 800 metres.

Ricardo Cunningham of MVP crossed the line in 1:50.89 to win semi-final two to also book his place in the final along with second-place Aldwyn Sappleton (1:50.99) and third-place finisher Nicholas Reid (1:51.41).