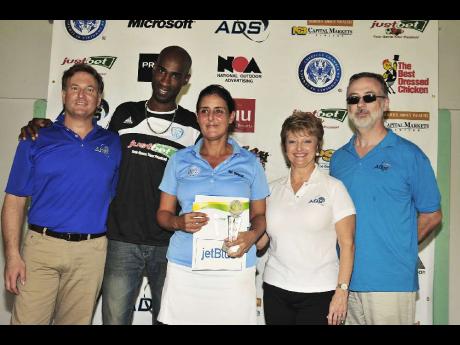 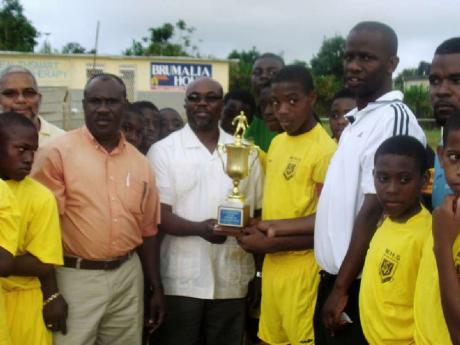 Members of the management and coaching staff, as well as squad members of Mile Gully FC look on as their captain collects the Manchester Under-13 football trophy from the managing director of C&D Construction and Engineering, sponsors. Also looking on is Dalton Wint (third left), Manchester FA president. - Photo by Richard Bryan
1
2

There were centuries galore in the seventh round of the Reggae Jammin Business House 50-over cricket league last Sunday, two of these coming in the same match at Kensington Park.

In this match, Sagicor defeated Digicel by 94 runs, with Sagicor top-order batsmen Dwayne Ewart and Kemar Marshall scoring 117 not out and 105, respectively.

In another match at Chalmers Avenue, LIME's top-line batsman Ryan Francis slammed 165 against Bank of Jamaica (BOJ) as his team won by a massive 365 runs. And at Jose Marti playing field, defending champions National Housing Trust (NHT) defeated Jamaica Urban Transit Company (JUTC) by 58 runs, with Errol Downer of NHT scoring 107 not out.

The league continues tomorrow with Sagicor vs NHT at Emmet Park, BOJ vs National Water Commission at UWI Bowl, Jamaica Broilers vs Jamalco at Spring Village, JUTC vs LIME at Jose Marti, and NHT vs Digicel at Mico.

The Gleaner won their first two matches in Division II of the Business House 3-on-3 basketball competition at the Stadium Courts earlier this week in contrasting fashion.

In the opening round on Monday, The Gleaner clipped Wray & Nephew 26-24 in a closely contested match.

With three NBL players now at their disposal, the 'newsmen' had to work hard for the victory under a new scoring format introduced by the Business House Basketball Association. Each basket is now counted as a single point instead of two.

In their second match at the same venue on Wednesday evening, The Gleaner drubbed JNBS 30-15. Allen led the scoring with 11 points, while Courtney Airs and Wolfe supported with nine and seven points, respectively.

The JPS-sponsored Rockfort Community Football League was launched last weekend at the community centre, with Virgo United adjudged the Best Dressed Team for the 2012 season.

In the opening match, defending champions Springfield were held to a 1-1 draw by Slip Dock.

Organised by the Rockfort Sports Council, the competition will run for six weeks. The final is scheduled to be played on August 26.

Defending champions Petrojam maintained their lead in Division I of the KSAFA/Western Sports Business House football competition, following their 3-1 win over Wisynco at Tinson Pen on Monday.

Goals from Aphas Bernard (2) and David Stultz ensured a comprehensive win for the unbeaten Petrojam, who lead the standings with 13 points, thanks to four wins and a draw against NHT.

Former champion Scotiabank blanked Norman Manley International Airport 2-0 last Saturday at the NWC playing field, Mona, to be second with 10 points, but from four matches. A goal in either half by Jamoy Sibbles and Richard West secured the win for Scotia.

The competition continues this afternoon with Scotiabank vs NHT at Alpha Boys' School starting at 2 p.m., and Norman Manley International Airport vs UWI at Harbour View at 4 p.m.

Round Hill and Holland PYC will do battle in the first-leg final of the St Elizabeth Co-op Credit Union-sponsored St Elizabeth Division One football competition at the New Town Centre in Black River tomorrow, following decisive second-leg semi-final results earlier this week.

Round Hill defeated Haughton 4-2 to emerged 5-2 on aggregate. Carl Campbell's goal the previous weekend had given them a 1-0 edge. However, Haughton turned in an excellent first half to level the overall tie with a 2-1 lead at half-time. But Marlon Miller's brace, as well as Campbell's 65th-minute goal, produced the final twist and Round Hill's entry in the final.

In the second semi-final, Holland ended Northampton's hopes with a 2-0 win to emerge 4-2 on aggregate. The first leg had ended with both teams level at 2-2. However, Holland, who had squandered a 2-0 lead in that game, made no such errors this time around as Sadeek Spence (13th minute) and David Beezer (38th) ensured victory.

The St Elizabeth Division Two champions will be known tomorrow when Fullerswood and Great Bay Lions meet at the New Town Centre at 1:30 p.m.

The game will be played as the curtain-raiser to the Division One first-leg final between Round Hill and Holland PYC. This league is not sponsored, hence the St Elizabeth FA has announced it will be charging an entry fee to offset match expenses.

Regardless of tomorrow's outcome, both teams will be promoted to next season's Division One. The clash is, however, eagerly anticipated as both are unbeaten and qualified with impressive semi-final wins.

Fullerswood, who won one of two preliminary zones, were 3-1 winners over Southern Stars.

The Manchester Football Association successfully kicked off its inaugural women's league last week at the Mt St Joseph Prep playing field on Manchester Road in the parish. The league is being run with major sponsorship from local Member of Parliament Mikhail Phillips.

The kick-off included an opening ceremony and dress parade before a total of six matches were played.

The Kendal A and B teams were most impressive on opening day. Kendal A smashed Holmwood United 7-1, before defeating Mile Gully A 4-0. Holmwood also suffered at the hands of Kendal B, 0-4, but it was Mile Gully B who felt the might of the Kendal B team, going down 0-7. In both Kendal B games, striker Shadane Reid netted four goals.

In other results from the opening round, Cross Keys defeated Mile Gully B 2-0, but drew 1-1 with Mile Gully A.

Mile Gully FC, which is outfitted by players from Manchester High, won the Manchester FA Under-13 League, sponsored by C&D Construction and Engineering.

They won 3-0 over club partners Mile Gully Youth, which is outfitted by members from the Mile Gully High and community. In the one-hour game hosted at Brooks Park, Kareem Walker opened the scoring in the seventh minute. Kareen Allen then booted home a 25th-minute free kick before the leading scorer in the competition, Kimani Blake, sealed the win with a deflected goal five minutes from time.

Despite losing, Mile Gully Youth paraded the best goalkeeper in Brandon Newman, who impressed all with a number of saves.

All three Zones are beginning to take shape in the Jamalco Football League.

Zone One is led by the impressive Top Hill, who have six points from two games, scored 11 goals and are yet to concede any. Invincible are next with four points compiled from a win and a draw.

Zone Two has now taken shape as the 'Group of Death'. Napoli lead the charge with six points, followed by Sunset and Wembley on four each, with Mineral Heights next on three points.

In Zone Three, New Bowens and Juventus are locked on six points after two games, with Bottom Halse Hall next on three.

In highlights from last weekend's round, Wembley handed Hunts Pen their second consecutive defeat of the season, winning by 2-0, while Andrew Vanzie scored his second goal of the competition in leading Juventus to a 1-0 win over Mocho.

In the feature game, Wembley were awarded a penalty in the 17th minute of play, when goalkeeper Milton Codner brought down Damion 'Cat' Vernal. The goalkeeper made amends as he superbly saved Cat's attempt. The game's deadlock was broken in the second half when Dwayne 'Jeff' Campbell scored.

Hunts Pen were then reduced to 10 players when Kean Smith was expelled in the 73rd minute for verbally abusing the referee. Brian Richards sealed the victory for Wembley in the 86th minute.

Hamilton Gardens made a successful return to junior cricket as they condemned former champs, Ken's Wildflower, to a shocking six-wicket loss at the Bridgeport sports ground in the feature match in the Milo-sponsored Portmore Metropolitan U-15 Cricket League, at the Bridgeport ground last Sunday.

Ken's Wildflower batted first and were skittled out for 67 in 20.3 overs, as Hamilton's spinner Nickoy Roberts bagged 5-23, including the competition's first hat-trick. Jordan Newman supported with 2-15. Robert Johnson made 22 for Ken's. Hamilton Gardens replied with 74-4; Shevon Bonfeather was unbeaten on 36.

Meanwhile, defending champs Portsmouth made a winning start through an exciting six-wicket victory over Washington CC at the Portsmouth ground. Washington made a competitive 184 all out in 25.3 overs. Krichon Givon, 53, and Daren User, 43, made the most runs for Washington. Vauyani Bailey 4-30 and Simon Lee 4-47 took the most wickets for Portsmouth. Portsmouth replied with 189-4 in 27.3 overs. Corey Bailey hit a top score of 50, while Mickayle Riley made 39. User took 2-30 for Washington.

Raewin Senior gave Portmore a 1-0 lead from a free kick, but Wanderers' Damion Powell scored from a goalmouth melée 10 seconds before the final whistle, and forced extra time. With no goal in the bonus period, the game drifted to penalties. Zidane Bogle, Jamoi Topey, Raewin Senior and Raheem Walker scored from the spot, while Tyrique Reid and Mario Salesman netted Wanderers' penalties. At the end of the match, Peter Reid, president of the St Catherine Football Association, handed over the winning trophy to the new champions Portmore.

Portmore teams Portmore Pines, the new parish champions and runners-up and dethroned champs, Bridgeport, will today bow into action in the Round of 16 phase of the Social Development Commission (SDC) cricket competition.

Last Saturday, a fair-sized crowd witnessed an exciting end to the Portmore final match as Pines registered a one-wicket win over Bridgeport at the Bridgeport sports ground. Bridgeport batted first and were restricted to 133-8 off their allotted 20 overs, as Ramon Senior hit 31 and Delroy Morgan chipped in with 26. Terrence Brown, 3-15, led Pines' bowling. Portmore Pines made 134-9 to clinch the title. Kemar Foster top-scored with 43, while Senior took 3-27 for Bridgeport in a good all-round performance. Bridgeport, however, were rewarded for their gallant effort as they took the best second-place team and joined Pines and the other 14 parish champions in the Round of 16.

Both teams didn't have easy semi-final wins as their opponents played hard.

Old Harbour had to come from behind to edge New Raiders 2-1. Raiders took the lead in the 32nd minute courtesy of Travis Burrell, but two goals, one in first half stoppage time and another goal in the dying moments of the match by hero, Raheem Irving, led them to victory. Meanwhile, Rivoli defeated DB Basovak 5-3 in a goal-fest. Akeem Cole (2nd, 57th), Ryan Smart (9th), Andrew Daley (42nd), Ryan Smart (44th) scored for Rivoli, while Juvaughn Powell (22nd), Tahj Beckford (56th) and Ackeem Gibbons (78th) were DB Basovak's scorers.

Cumberland FC, fresh from their 8-0 demolition job on Bridgeport in last week's round of matches in the Colin Fagan-sponsored Portmore U-15 football league, will enter tomorrow's opening game of a double-header against Reid's Pen at the Cumberland playing field very confident of victory.

This match is scheduled for 2 p.m. and it precedes Bridgeport facing the might of defending champs Portmore United. A double-header is scheduled for the Passagefort playing field and pit Daytona versus Wanderers in the opener at 2 p.m., while in the feature match at 4 p.m., Newton Braeton will be trying to win their first match in three tries as they take on Passagefort United.

CAPTION: Members of the management and coaching staff, as well as squad members of Mile Gully FC look on as their captain collects the Manchester Under-13 football trophy from the managing director of C&D Construction and Engineering, sponsors. Also looking on is Dalton Wint (third left), Manchester FA president. - Photo by Richard Bryan