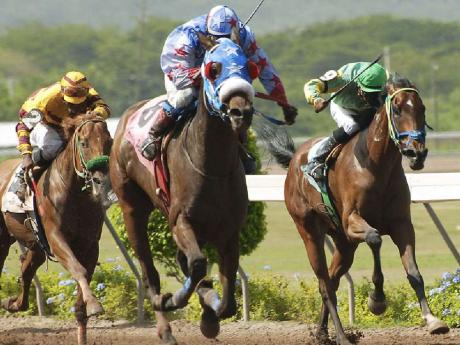 The imported 3-y-o colt RICHIEHAPPYNOTION should rebound with a win in the 3-y-o and up overnight allowance feature for the G.A. 'Sarge' Bucknor Memorial Cup over the straight five course at Caymanas Park today.

The 11-horse field also includes the recent winners MR SKILL, SAINT THERESA, SIR D, and SMOKIN MAN, all of whom should go well in a race of this nature.

Others such as the consistent NEW KINGSTON and the stable-companions JAYLEN and PALACE GUARD will have their fair share of supporters. But the Lorne Kirlew-trained RICHIESHAPPYNOTION could just have a bit more class than his opponents and gets a glorious opportunity to resume winning ways.

He is conveniently placed in the scales with 53.0kg and will again have the services of former champion jockey, Omar Walker.

The American colt by Great Notion out of Happy Sylvia last won over the straight on February 22 and since then has been beaten by the out-of-class American fillies NOON IT IS and HUPOMONE in two separate races, both behind fast times.

RICHIESHAPPYNOTION finished 3 1/2 lengths second to NOON IT IS in a fast-run 1100-metre race on April 8, which saw the winner clocking 1:05.3. He had the very useful CLASSY PROSPECT behind then, and that performance speaks volumes for his chances today.

Last time out over 1200 metres, RICHIESHAPPYNOTION chased HUPOMONE to the last furlong behind fast splits before weakening into fourth place. But with none as good as HUPOMONE, or for that matter NOON IT IS around, he should definitely come into his own and win this trophy for his connections.

I am expecting him to lead on the far side from early before angling to the middle of the track at the halfway stage.

He will have the very speedy MR SKILL (now up in class) to contend with at this stage, along with the grey SMOKIN MAN and the lightly raced but improving four-year-old filly, SAINT THERESA, now venturing up in class with winning form under champion jockey, Dick Cardenas.

But in the end, victory should go to RICHIESHAPPYNOTION, leaving SIR D, MR SKILL, and SAINT THERESA to fight it out for the minor placings.

Other firm fancies on the 11-race programme are MERU (working well) to repeat in the opening race over 1400 metres, SEARCHING FOR GOLD in the second, UNCLE KEN in the third, ST BERNARD in the fifth, LISA VIBES to stave off DOUBLE BUTTON in the sixth, and ROCKETEER to beat SUNSHINE CITY in the seventh.