Gayle wants to win for fans 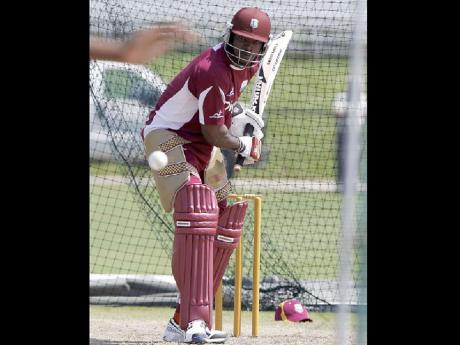 CHRIS GAYLE flashed his characteristic smile yesterday morning as he embraced several West Indies fans at the Central Broward Regional Park. Gayle and the West Indies team had just arrived for training and as they got off the bus fans were on hand to "show some love" to the home players.

The strongly built six-footer admitted that the atmosphere in south Florida reminded him of the prematch hype back in the Caribbean. During his time in the batting cage, Gayle deposited a few balls into the stands and on to the grass mound to give supporters a taste of what they can expect this weekend.

"This is an important series. The people here have come out to support us and are making us feel very relaxed and at home. It is a chance to get some wins under our belt as we look forward to the T20 World Cup (in Sri Lanka in September). We are looking for a good start in these two T20 games before we move on to Jamaica for the start of the one-day series," Gayle said.

Start with a win

"The first game of any tour, of any series, is always important and hopefully, come tomorrow, we can get that kick-start that would be so vital no matter where in the world you are playing. We have a lot of supporters here and it is clear they are excited to see us come and play in America. It would be really nice to start with a win for them, for the people back home, and all our fans."

There is great expectation as the Windies prepare to play their first official match in the United States. They face a well-rounded New Zealand team in the two-match Digicel T20 Series on Saturday and Sunday. Although the matches are being played away from the Caribbean, the West Indies are seen as the 'home team' and can expect massive support from the crowd of over 15,000. South Florida is home to one of the largest Caribbean communities in the United States.

"The conditions here are great ... it's warm, but we are all natural West Indians and we can handle the heat. The guys have been training really hard and we are confident of doing well. It is good to be back among this great group and I'm enjoying it," the Windies Number 45 said.

"I have been hitting the ball well. I had a half century in England and since I have come over to America I am enjoying it. When the time comes around tomorrow, I will just look to go about the business as I usually do - that is try to get a start and push on from there."

The powerful 32-year-old is preparing for his 22nd T20 international. He has also played 91 Test matches and 229 one-day internationals for the West Indies, making him the most experienced member of the 13-man squad.

"This is a new venue. Most of us have never played here before, so you have to be sensible in your approach and give yourself every opportunity to be successful. It is always good to have confidence, and part of that confidence comes from your preparations, so we have to prepare mentally as well as physically to take advantage of any situation."