Federer battles back from brink of elimination 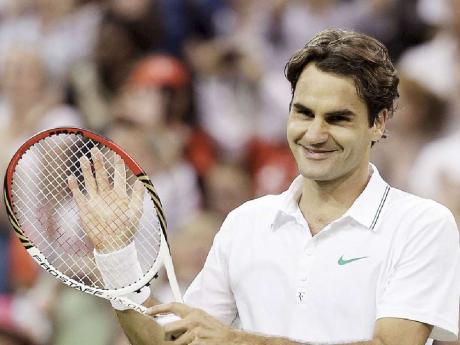 Roger Federer of Switzerland reacts after winning a third round men's singles match against Julien Benneteau of France at the All England Lawn Tennis Championships at Wimbledon, England, yesterday. - AP

Federer avoided the fate that befell nemesis Rafael Nadal 24 hours earlier on the same Centre Court. Nadal, a two-time champion, made his quickest exit from a major since 2005 when No. 100-ranked Lukas Rosol beat him in five sets on Thursday.

Benneteau had won his past four five-set matches, but this time he was the wearier player at the end, twice requiring thigh massages from a trainer for cramps during the fifth set. Federer cracked a forehand return winner into the corner to break for a 3-1 lead and pulled away from there.

A hobbling Benneteau appeared in tears before the final point and he dumped his last shot in the net. Fans roared as a grinning Federer gave them a triumphant wave.

"He proved he is great. The greatest,'' Benneteau said. "Mentally, he's a rock. He's two sets down and he doesn't show anything.''

Federer also erased a two-set deficit to beat Juan Martin del Potro in this month's quarter-finals at the French Open. He has mounted eight comebacks from down 0-2 in his career.

"The thing is, when you're down two sets to love, is to stay calm, even though it's hard, because people are freaking out, people are worried for you,'' Federer said. "You don't have, obviously, many lives left out there. You just try to play tough and focus point for point. Sounds so boring, but it's the right thing to do out there.''

The No. 3-seeded Federer seeks to match Pete Sampras' modern record of seven Wimbledon championships. He has been stalled for two and a half years at a record 16 Grand Slam titles, but Nadal's departure improves his chances next week.

Federer has reached at least the quarter-finals at a record 32 consecutive major tournaments.

When a drizzle delayed the start of the third round, tournament officials decided Djokovic's match should be played inside. An odd spectacle ensued: The roof closed as the sun came out and outside court covers came off.

"I was a little bit surprised, when I saw sunshine, that the roof is closed,'' the defending champion said. "Obviously, they're relying on a forecast that I don't think is very reliable here. But OK.''

Also advancing to the second week was top-ranked Maria Sharapova. She rallied from a break down in the second set to beat Hsieh Su-wei 6-1, 6-4.