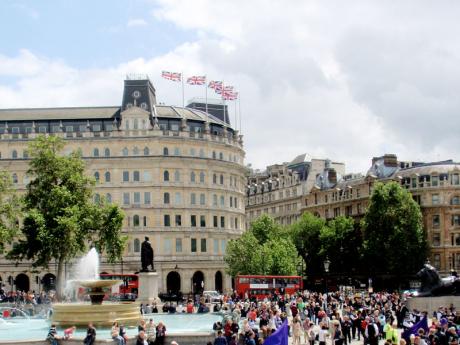 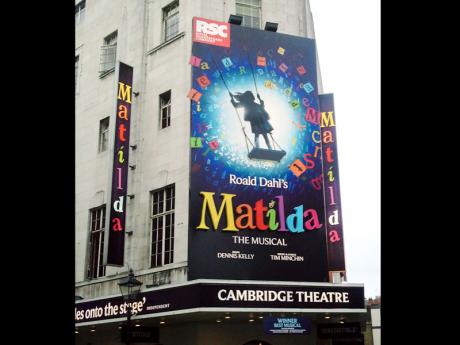 Matilda, The Musical marquee in London.-Photos by Laura Tanna 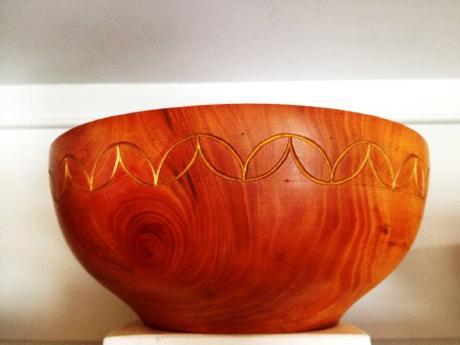 This is one of 10 mahogany bowls created by Rose Hall artisans, with gilded-leaf pattern, ordered by Prince Charles for visiting heads of state.
1
2
3

What could be better than meeting up with friends while spending a week in London, especially if one of those friends is former American ambassador to Jamaica Brenda LaGrange Johnson who hosted a luncheon for newly arrived Jamaican High Commissioner to the United Kingdom, the Honourable Aloun Assamba.

Also joining us at George, a private club on Mount Street, was the chairman of Rose Hall Development, Michele Rollins, who wasted no time in showing us photographs of 10 beautifully carved mahogany bowls with a leaf pattern gilded onto the artworks by Rose Hall artisans.

These were ordered by Prince Charles as gifts for visiting heads of state, with all proceeds going to the Prince's Trust For Building Community in Rose Town, St Andrew, Jamaica.

High Commissioner Assamba is hard at work and greatly impressed with how much the Commonwealth means to Queen Elizabeth II, who recently attended a luncheon to which the high commissioner was invited.

Jamaica House at O2 dome will take place tomorrow with Jamaican products on display and for sale. A concert will be held there every night from July 25, she told us.

Another event to mark the Diamond Jubilee

Celebration in London, which took only half an hour to visit but fascinated us, was a special exhibition at The National Portrait Gallery, 2 St Martin's Place, London WC2 (Tel: 020 7312 2463), just off Trafalgar Square where 60 portraits and photographs of Queen Elizabeth II are on display.

Entry to the National Portrait Gallery is free - and do look at the permanent collection which is incredible - The Queen: Art & Image costs £6 and covers the great span of her life and emotions, often in the company of family or when photographers have captured spontaneous reactions to historic moments.

Of course, Trafalgar Square always makes for a festive outing, and surrounding streets now decorated with scores of Union Jacks hanging above the hustle and bustle gives one a feeling of being somewhere special.

My marvellous brother-in-law took care of planning theatre evenings, inviting us first to One Man, Two Guvnors at the Theatre Royal, Haymarket, running until January 12, 2013.

James Corden, who originally starred in the London production, took it to Broadway where he just won a Tony for his New York performance.

A rollicking comedy, with more than a few pratfalls and slapstick, this is a genuinely funny play in the best of 'British Humour'.

We dined at The Wolseley, 160 Piccadilly, next to the Ritz, (Tel: 020 7499 6996) because it remains open late for after-theatre dining. But grand as it may seem, the cavernous former bank is just too noisy for conversation.

Eugene O'Neill's Long Day's Journey Into Night is at the Apollo Theatre until August 18, 2012, based on O'Neill's own family and by his written instructions not to be published until 25 years after his death, and never to be performed, was absolutely riveting.

His third wife who was sole executor of his literary estate decided to ignore his wishes once his parents, brother and son were also dead.

This was the first time I'd seen a staging of work by America's great playwright who received four Pulitzer Prizes and the Nobel Prize for Literature.

Be warned, this drama is depressing, but the acting superb, especially David Suchet who brilliantly played the father role.

He looked vaguely familiar, but I was shocked to discover I'd seen him before as the Belgian detective Hercule Poirot in the Agatha Christie thrillers - so different is he in this play.

Dinner afterwards was at The Ivy Club. Londoners' private clubs are a most impressive tradition!

Having seen first an hilarious comedy and then a gripping drama, the musical Sweeney Todd at the Adelphi Theatre until September 22, 2012, based on the theme of a throat-cutting barber, proved too long and macabre for my taste, though Stephen Sondheim has enjoyed great popularity with his music and lyrics. Dinner afterwards at The Delaunay, 55 Aldwych (Tel: 020 7499 8558), was another of those large, after-theatre noisy restaurants and though The Sunday Times gave it a thumbs up review the weekend after we were there, I could only conclude that it pays to have Andrew Lloyd Webber as your dinner guest, as that reviewer did, in order to get good service.

I literally had to leave my entree uneaten it was so poorly prepared, though to their credit, the restaurant removed the item from the bill.

Matilda The Musical, based on Roald Dahl's children's book, produced by the Royal Shakespeare Company at the Cambridge Theatre and running until February 17, 2013, bills itself as suitable for audiences from six upwards, and both the cast and audience contained many youngsters who thoroughly enjoyed themselves.

The girl playing Matilda was terrific, as were most of the actors and the special effects with strobe lights and confetti probably most appealing.

Me, they hurt my contact lenses. I definitely would have preferred reading the book, since the story was delightful. If you like loud musicals you'll probably like this one.

Dinner at The Ivy, 1-5 West Street (Tel: 020 7836 4751) was fun. Even though it is a bit noisy, one can still converse, the decor is warm, the service attentive and the cuisine consistently good.

If you just want some good Chinese food in plain surroundings, try Beijing Dumpling, 23 Lisle Street, London WC2H 7BA (Tel: 020 7287 6888) in China Town. They charge £10 for corkage, but taking our own magnum of excellent Margaux for a table of eight made for a merry evening.