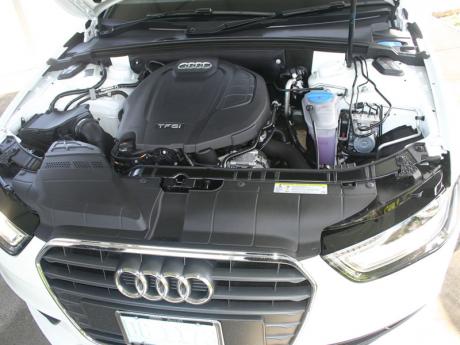 The unprecedented eight-speed multitronc transmission - see full caption at the end of story. 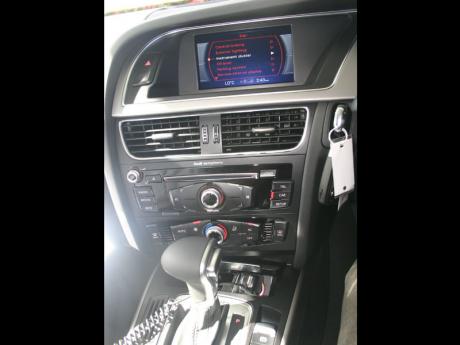 All A4-sedan come standard with an Audi Multi-Media Interface. This system employs a display screen, a joy-knob and clearly marked buttons, and has eliminated the technician with an easy-to-use computer system which allows the driver to reprogramme and set various functions to his/her preference. 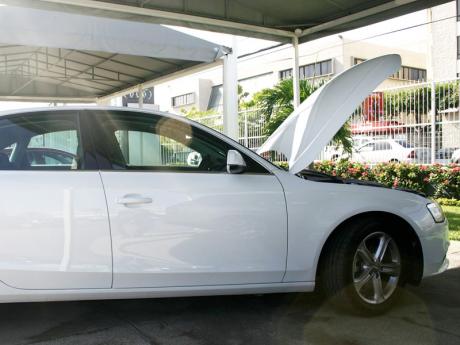 The reduce angle at which the windshield is cut also contributes to the aerodynamic efficiency of the 2013 Audi A4.-photos by Christopher Serju 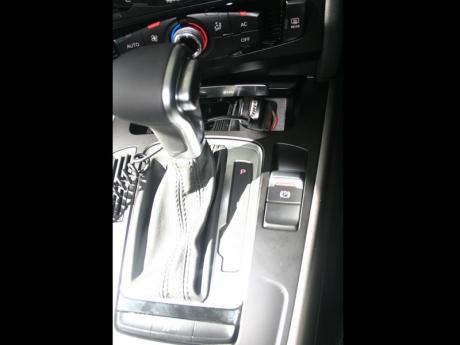 Gone are the days of hand brakes. The parking-brake system braking is operated by a button on the centre console.
1
2
3
4

A combination of practical technological innovations in the 2013 Audi A4 has resulted in a masterpiece of a vehicle.

Already impressed by the integrated multi-media interface and other features of the instrument panel, while enjoying the privileges of passenger status, it was a particular experience while driving in the vicinity of the cement factory on the edge of Kingston Harbour that really struck Automotives.

Despite my best efforts, I clipped a pothole. I know I did because I really tried to avoid it, but did not. Of that I am sure, but as I sent off a silent apology and braced for the expected jerking, I was surprised when the car kept running smoothly. Confused, I raised the matter with my passenger, Etus Collman, senior sales consultant with ATL Autohaus.

His nonchalant response really threatened to send me over the edge. "Oh, that's because of the Comfort Rough Road Suspension, which is standard on all Audi A4s we import," he said.

Collman went on to explain that this special suspension system is built from some of the hardest metals and is able to tolerate the exacting rigours of Jamaica's poor road conditions.

The dampening effect of the A4 comes to the driver's rescue, eliminating the shock usually associated with driving on rough roads. Translation: the vehicle feels the rough roads - its occupants enjoy a smooth ride.

Then there is the unprecedented eight-speed multitronic transmission, which is mated to a 1.8-litre turbocharged engine with a top speed of about 140 miles per hour (mph).

This combination is capable of distributing 170bhp and 250Nm of torque, coming on between 1,500 and 4,500 rpm, with the eight-speed transmission allowing for greater fuel efficiency. It also makes for effortless shifting, less stress on the engine and minimal noise.

It's considered mean because it only squeezes out a gallon of 90-octane petrol for a 30-mile run around town or a 50-mile run to the country.

The emergency braking system is operated by a button on the centre console and only requires the use of a finger to be engaged (gone are the days of handbrakes).

A unique function of this Electro-mechanical Emergency Braking System is that a passenger can engage the brake and bring the A4 to a complete stop in the event of a driver becoming unable to function while driving. This is achieved by the braking system electronically disabling the accelerator in emergency-braking situations.

Furthering the ergonomics of the new A4, releasing the parking brake does not require a manual operation. Once the driver is safely strapped in and the transmission is engaged, a simple tap on the accelerator will release the parking brake automatically and the driver can be on his/her way.

All A4-sedans are also equipped with Anti-lock Braking System with Electronic Brake-force Distribution.

This system decides how urgently the driver wishes to stop and distributes braking accordingly to avoid you being jolted, but still stopping within the required time frame.

In combination with the Comfort Rough Road Suspension, this feature will make a significant difference in ensuring a much smoother ride.

Despite all the hi-tech gadgetry, Audi achieves the remarkable with its easy-to-touch controls which are designed to be operated with minimal distraction. Automotives was particularly impressed with the ease with which one can 'self-customise' settings from the multi-function computer display.

Although the speed warning can be annoying, that is why it works. This feature allows you to set the maximum speed at which you want to drive and,

should you go above that, sets off a 'pinging' noise to alert you of the breach and keeps doing so until you cut your speed.

The multifunction steering wheel consists of all the controls needed to operate your entertainment systems, and all A4-sedans comes standard with an Audi Multi-Media Interface (MMI). This system employs a display screen, joy-knob and clearly marked buttons.

By virtue of this MMI System, the A4-sedan has eliminated the technician with an easy-to-use computer system, which allows drivers to reprogram and set various functions to their preferences.

The A4 driver can determine how many doors will unlock upon pressing the unlock button on the smart key (driver's door only or all doors at the same time). He/she can electronically lock the trunk so only he/she can authorise its opening.

Other standard options include being able to check the oil level from inside the car and dual-zone air conditioning system allowing for different temperature settings for driver and passenger.

In promoting this aspect of the sales package, Collman explained that it provides the convenience of not paying a charge for scheduled service and also provides a buffer against inflation and exchange rate fluctuations during the three-year period.

Along with this is the mandatory three-year factory warranty from Audi, which covers the labour and part-replacement cost of every nut and bolt on the car (except for tyres and accidental breakages).

The unprecedented eight-speed multitronic transmission is powered by a
1.8-litre turbocharged engine with a top speed of about 140 miles. This
combination is capable of distributing 170bhp and 250Nm of torque,
coming on between 1,500 and 4,500 rpm with the eightw-speed transmission
allowing for greater fuel efficiency, allowing as it does for
effortless shifting, less stress on the engine and minimal noise.