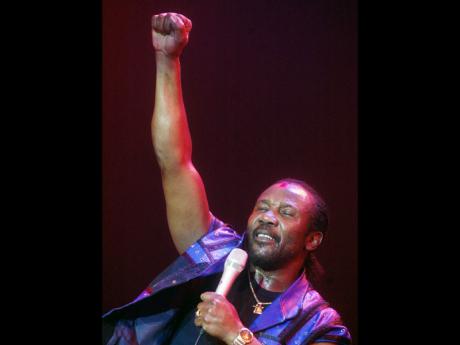 The last time Frederick 'Toots' Hibbert did a pure ska release was in 1964, two years after Jamaica's Independence. That recording by the Maytals, along with the Skatalites, was titled Never Grow Old.

Today, on International Reggae Day (IRD), he does it again with Ska Never Grow Old, a tribute to the sound of Independence and the Skatalites.

Andrea Davis of Jamaica Arts Holdings, which is hosting the 18th staging of IRD, said the six-track release is also "an encouragement to the musicians and producers to revisit the Jamaican sounds".

"We have not put out any ska in years, yet it continues to grow," she said, citing United States band Slightly Stoopid as an example of an in-demand ska band and stating that there are as many ska festivals as there are reggae festivals around the world.

Tracks on Ska Never Grow Old are Dum Dum, Chimcherry, Three Little Birds, On the Sidewalk, These Chains and You're Insane.

Sound of the day

There are more releases for IRD 2012, the Gramps Morgan set Reggae Music Lives speaking directly to the sound of the day, while a various-artistes CD will have the multi-artiste Rise Up, Bittersweet (Jesse Royal), Reggae Reasoning (Chantalle Ernandez), New Name (Jah9), Woe Be Unto Them (I-Wayne) and Coronation Market (Sly and Robbie), among others.

The Toots Hibbert documentary Reggae Got Soul and album Unplugged at Strawberry Hill will also be released today.

While IRD has always been celebrated as a global media festival, there were plans to stage a multi-faceted event at Emancipation Park today. It was slated to include the participation of IRD honourees Dermott Hussey, David Rodigan and Barry G, all of whom have played important radio-broadcasting roles in the development of Jamaican popular music.

In addition, it would have had a creative expo and concert.

In the middle of last week it was announced that the Emancipation Park component of IRD 2012 had been cancelled. Davis explained that after being approached by the Jamaica50 organisers to have the event as part of a weekend that includes the Military Tattoo at Up Park Camp and National Senior Track and Field trials at the National Stadium, in the last few weeks "we were unable to get feedback. When we did get the response it was that it was not possible at this time".

Attempts to contact Robert Bryan on Friday evening, regarding Jamaica50's reason for pulling out, or if they had in fact done so, proved futile as calls to his cellphone went directly to voicemail.

Although Davis is confident that the creative expo and concert would have easily attracted other sponsors, there was not enough time to secure replacements. Further, it did not allow enough time for the required promotion and level of execution.

Davis pointed out that "a free event takes sponsorship" as, even when artistes donate their time and talent, "there are production costs that are unavoidable if you want to present something at a certain level".

"It leaves us in an awkward position as in 18 years we have not had to cancel an event," Davis said.

However, Davis said sponsorship will "definitely" be pursued next year, one of the hopes being that "the companies which use reggae as a vehicle" will also see IRD as a suitable entity to partner with, especially as it is "a global media festival that celebrates the best of creative Jamaica".

The Government-run PBCJ will run various specials from noon to midnight, an IRD special with Raging Fyah, Jah9, Jesse Royal, Chantalle Ernandez and Luciano which is slated for 8 p.m.

On radio, the three honourees will be on RJR with Gerry McDaniel on 'Palav', which airs between 1 p.m. and 4 p.m. Bess FM, through T Boots Harris, contributes specifically to the day from 7 p.m. to 9 p.m.

In emphasising the strength of Jamaican popular music worldwide and how the sound is developing at home, Davis said "while we are busy trying to sound like the rest of the world, the rest of the world is trying to sound like us". So even as media from "Brazil to South Africa" and "Bahamas to the US and UK" get involved, Davis notes that persons in these countries are celebrating their home-grown reggae as much as the music made in Jamaica. "They do it not only about us, but about themselves," she said.