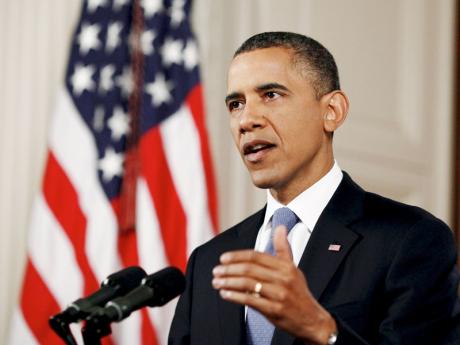 President Barack Obama speaks in the East Room of the White House in Washington last Thursday. Martin Henry says the United States' swagger in its promulgation of FATCA and drone surveillance in the Americas builds on the foundation of Manifest Destiny and the Roosevelt Corollary.-AP

Just when we are reasserting our sovereignty for the golden jubilee of Independence, FATCA and the surveillance drones are coming.

Come January 1 next year, financial institutions around the world, including ours, will be 'required' under the new Foreign Account Tax Compliance Act (FATCA) to provide the government of the United States (US) with information on American citizens and individuals described as US persons who have savings outside the country in excess of US$50,000.

Telling credit unions at the opening of the Caribbean Confederation of Credit Unions in Montego Bay recently that they, too, would be obligated to FATCA, Finance Minister Peter Phillips said Jamaica cannot escape the realities of the global financial environment, and, further, if Jamaica does not have an appropriate and acceptable regulatory framework, the country's financial system will face difficulties. Which is just underdog code for saying we must toe the line dictated by the Americans or face exclusion from the global financial system which they control.

Meanwhile, the world's second most important currency after the US dollar, not the Chinese yuan or the Japanese yen, but the Eurozone euro, is in crisis. Italian saviour Prime Minister Mario Monti, with his own country in deep financial distress as a member of the PIIGS of Europe, warned in Rome ahead of last week's EU Summit that Europe had a week to save the euro and with it the Eurozone.

"Italy's prime minister, Mario Monti," reported The Guardian of June 22, "has warned of the apocalyptic consequences of failure at [the upcoming] summit of EU leaders, outlining a potential death spiral that could threaten the political and economic future of Europe."

On the eve of the summit, with Germany and France the core founding members divided over austerity and Britain which stayed out of the euro on the sidelines, the paper on the 27th said the Greek drama has engulfed the EU "into its most perilous crisis ever" and quoted the head of the European Commission, José Manuel Barroso, saying, "This crisis is the biggest threat to all that we have achieved through European construction over the last 60 years." A crisis that started financially on the periphery, in Greece, Ireland and Portugal, the paper said, had now shifted politically to the union's heart, the Berlin-Paris axis.

Back in London, BBC Radio 4 was reporting the unprecedented spectacle of governor of the Bank of England, Mervyn King, telling Parliament that it was impossible to forecast in the current EU and global economic environment. The radio spoke to a number of forecasters asking if their jobs had become redundant!

In language hardly befitting the head of one of the world's most important central banks speaking to the Treasury Committee of his Parliament, Sir Mervyn said, "There is just enormous uncertainty out there, I have no idea what is going to happen in the euro area."

The bemused governor said his own estimate of how long it will take the UK to recover from the recession "is expanding all the time" and he was pessimistic about the eurozone outlook. "I am particularly concerned," he said, "because over two years now we have seen the situation and the problem being pushed down the road ... . We are in the middle of a deep crisis with enormous challenges to put our own banking system right ... ."

And the surveillance drones are coming to the Caribbean! The same types that remotely dispatched the second-in-command al-Qaida leader in the backlands of northwest Pakistan.

From The Gleaner (online) of June 24: "... The United States plans to step up the use of Predator drones in the Caribbean and the Gulf of Mexico as it increases drug-smuggling surveillance.

"Predator drones were used by American Intelligence to find and kill al-Qaida suspects in Pakistan and Yemen. The US Department of Homeland Security officials said Washington has been quietly testing the drones over the Bahamas for more than 18 months. They say the latest move would dramatically increase US drone flights in the Western Hemisphere, more than doubling the number of square miles now covered by the Department of Homeland Security's fleet of nine surveillance drones, which are used primarily on the northern and southwestern US borders."

As the Republic of the United States of America closes its 236th year this Wednesday, July 4, in a presidential election year, and the drones fly into the Caribbean, memories of the Monroe Doctrine resurface. The website ourdocuments.gov tells us that "the Monroe Doctrine was articulated in President James Monroe's seventh annual message to Congress on December 2, 1823. The European powers, according to Monroe, were obligated to respect the Western Hemisphere as the United States' sphere of interest."

As history.state.gov tells us, "By the mid-1800s, Monroe's declaration, combined with ideas of Manifest Destiny, provided precedent and support for US expansion on the American continent. In the late 1800s, US economic and military power enabled it to enforce the Monroe Doctrine. The doctrine's greatest extension came with Theodore Roosevelt's Corollary, which inverted the original meaning of the doctrine and came to justify unilateral US intervention in Latin America."

A young British man, Richard O'Dwyer, is set to join our Christopher 'Dudus' Coke as an extraditee to the US. Coke went off without due process as the Government of Jamaica "bowed" to the imperial power of the United States, supported by local public pressure, in the words of then Prime Minister Bruce Golding.

One UK columnist, The Independent's Matthew Norman, as part of a media campaign against the threat of extradition, has raised a stink over O'Dwyer's case. In a stinging piece of commentary, 'The US, not Europe, is the enemy of our rights', Norman sharply criticised "the hideously imbalanced Anglo-American extradition treaty of 2003".

Norman directed his attack to his own government, asking, "What the hell it thinks it is doing by maintaining the cringing, cringeworthy stance of New Labour, which signed the 2003 treaty of which Mr O'Dwyer is the latest victim. A treaty which, in making it incomparably easier for the US to extradite our citizens than vice versa, exquisitely distils the true nature of the 'Special Relationship': British governments give the Americans whatever they want, and they give us nothing in return."

O'Dwyer's crime was to run, at 19 - he's now 24 - a website which provided links to other sites on which people could view movies without paying. He himself did not upload any movies or sell any pirated DVDs, but US customs authorities regard O'Dwyer's action as both criminal infringement of copyright and conspiracy to commit the same, each carrying a maximum five years' imprisonment. This, in Norman's view, is "nasty, vicious, sledgehammer-to-crack-a-nut, break-a-butterfly-upon-a-wheel" judgment "of the kind one expects from the vindictive justice system that sends people down for 50 years, under the three-strikes rule, for nicking a slice of pizza".

Mr Norman wants Prime Minister David Cameron to issue a brief statement that he will never allow a British citizen to be extradited without overwhelmingly clear evidence that a crime was committed under British jurisdiction, and that he will unilaterally rip up that treaty if the Americans persist in demanding it, since "cleaving to this one is a form of national self-abasement".

Where Mr Norman is dead wrong is in parroting the increasingly popular view that the American empire is today in rapid and seemingly terminal decline with no need for Britain to genuflect to it. Not to worry, the Special Relationship, going back to just after their last war in 1812, will hold between the UK and the US, with the UK very much in the subordinate position now.

NATO member Turkey is drifting towards war with Syria, which has shot down one of its military planes and fired upon another conducting a search for the missing crew.

The member has invoked Article 4 of the NATO treaty. Article 4 allows any member state to demand a NATO meeting if it believes its "territorial integrity, political independence or security" is threatened. This is only the second time in NATO's history that a member state has invoked Article 4. And in response, NATO has condemned Syria's attack "in the strongest terms" and said the alliance's 28 members will "stand together with Turkey in the spirit of strong solidarity". The United States is, of course, NATO's powerhouse.

Breathtakingly, as the president of the European Parliament noted, the opening day of the two-day EU summit, June 28, marks the 98th anniversary of the shootings in Sarajevo that triggered World War I and ushered in "decades of hatred, war, genocide and the displacement of peoples" in Europe. The EU, formed after the Second World War, was to prevent all this from ever happening again. But the region, with its conflicting alliances, could easily spiral into conflict WWI style.

The editorial of The Independent last Wednesday (June 27) was exactly about that possibility: 'An omen of how Syria's conflict could spread'. The editorial said, in frightening Armageddon style, "Incidents like the shooting down of the Turkish plane illustrate the knife edge on which regional security is poised. The nightmare prospect of a conflict involving Syria, Turkey, Israel and Iran becomes more credible with each passing day."

The superpower Soviet Union, the reason for NATO, is no more, gone suddenly and quickly like mist before the rising sun. And with all the awe in which rising China and India are now held, the old regard for the miracle economy of Japan, and the multitude of conflicts across the globe, it is still the North Atlantic, stretching into the Middle East, that runs the world, as has been the case for the last 500 years and which will overwhelmingly decide the destiny of a wobbling planet in this era of vast uncertainty.