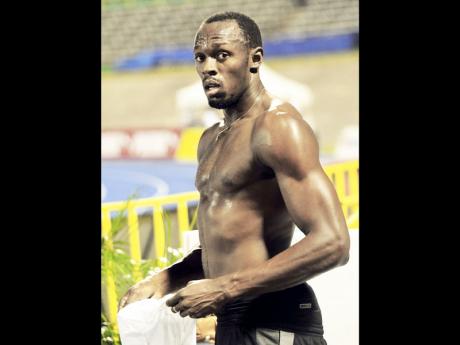 World record holder Usain Bolt looks on after winning a 100m quarter-final heat of Jamaica's Olympic trials in Kingston last Thursday. Chris Tufton says If Jamaica were to accede to the Madrid Protocol, Bolt would only have to hire one local agent in Jamaica to file one application in one language with one trademark office, and he would only have to pay one fee in one currency. -AP

Since the announcement of the most recent Budget presentation, much has been said about whether the Government should have done more to balance its austerity measures with more growth-facilitating programmes, to motivate increasing economic activity through its own expenditures or private sector-driven initiatives.

Many argue that the Budget seemed exclusively focused on collecting more revenue, with hardly any focus on stimulating the economy. There is a conclusion from this argument that higher taxes on industry and consumers (even with GCT reduction) will lead to a contraction, rather than the desired expansion, in economic activities, leading, ultimately, to less tax to collect.

The Government argues that its capacity to stimulate growth-related economic activities is highly restricted, as it is bounded by fiscal constraints because of debt obligations.

Fast-tracking Dr Omar Davies' highway and port projects (and JEEP) seem to be the Government's only trumpeted arsenal for stimulating growth and creating jobs.

But has the Government considered carefully and articulated methodically a strategy to address the critical enablers of growth? And what are these enablers of growth and associated costs to stimulate entrepreneurial activity?

It is hoped that greater clarity on the specific micro-policy issues to facilitate and stimulate economic expansion and job creation will be announced in the Sectoral Debate and that the perennial challenge of announcements without implementation will not be the norm, but the exception this time around. We need to get going.

There are a number of specific growth-enabling activities that would not cost Government financially but, with focus and effort, could begin a process of improving the business environment and encourage entrepreneurial activities.

Hopefully, the Sectoral Debate will focus on implementation of timetables. So let the debate focus on a growth-enabling strategy for Jamaica and on specific industries or sectors, specific initiatives, naming who is responsible for driving each initiative and outlining a timeline for implementation and completion. And let us work for bipartisan support in the interest of moving the country forward.

At the last sitting of the Senate, my colleagues on both sides of the aisle graciously supported a motion on what I consider a growth-enabling policy issue - signing on to the Madrid Protocol to facilitate ease of exporting and protecting our entrepreneurial intellectual property. On the face of it, this may not appear to be a growth enabler, but it is.

The Madrid Protocol Relating to the Madrid Agreement Concerning the International Registration of Marks (1989) is one of two treaties that govern the system for the international registration of trademarks (the Madrid System). Under the protocol, trademark owners can have their marks protected in a number of countries by filing a single application with their national or regional trademark office.

This process is not only efficient, but also cost-effective, since a trademark holder would not need to hire a local agent to file an application in each country he wishes to register this trademark. The Madrid Protocol also streamlines the management of trademarks by allowing owners to record subsequent changes or renew registration through one procedural step.

The World Intellectual Property Organisation administers the Madrid System. The protocol currently has 85 signatories, including the US, the European Union, Japan, China, Antigua and Barbuda, and Cuba.

Under the CARIFORUM-EC Economic Partnership Agreement, Jamaica has committed to accede to the Madrid Protocol by January 1, 2014.

There are many advantages, however, for the Government to sign on before 2014, and Jamaican entrepreneurs and creative and athletic talent can take advantage of the system's benefits.

Unsurprisingly, Jamaican brands, whether based on Jamaican products or Jamaican talent, are misappropriated across the world. Apart from adulterating the reputation of these Jamaican brands, wanton imitation leads to the loss of substantial revenue that should be filling Jamaican pockets.

Take, for instance, what could be considered Jamaica's most famous brand, reggae icon Bob Marley. According to an October 2009 Associated Press report, unlicensed Bob Marley merchandise generates sales of about US$600 million a year. However, legal merchandise brought in a paltry US$4 million in 2007, according to Forbes Magazine.

We cannot underestimate the value of Jamaican brands in overseas markets. We must safeguard the reputation and revenue stream of those brands, and the first step to doing this is international trademark registration.

As such, it is imperative that Jamaica does what it can - and urgently - to give its entrepreneurs and talent access to the simplest and most cost-efficient process of registering their trademarks in major markets, especially those that have demonstrated a predilection for Jamaican brands, like the United States, Japan and the European Union.

The Madrid system would make it much simpler for trademark registration and protection.

If Jamaica were to accede to the Madrid Protocol, this process would become much more simplified for Bolt. He would only have to hire one local agent in Jamaica to file one application in one language with one trademark office, and he would only have to pay one fee in one currency. The trademark protection he would receive under the Madrid system in all four jurisdictions would be equivalent to what he would receive under the otherwise cumbersome process.

It is also just as simple to record changes following registration. For instance, if there is a change in the name or address of the trademark holder, or if there is a transfer of ownership of the trademark, this could be recorded across multiple countries with one simple procedural step and one fee.

Also, under the Madrid system, there is also only one expiry date for the trademark and only one registration to renew.

The simplicity and cost efficiency of registering a trademark internationally under the Madrid system could encourage Jamaican entrepreneurs and talent to penetrate markets across the world.

Jamaican companies, in particular, can avail themselves of trade opportunities under the various international agreements to which Jamaica is party. Apart from helping to build Brand Jamaica in overseas markets, familiar and unfamiliar, this would undoubtedly present an income-generating opportunity to those entrepreneurs and talent.

Trade agreements like the EPA between CARIFORUM and the EC can only be fully exploited with us being a signatory to this protocol.

Concerns regarding Jamaica's accession to the Madrid Protocol have primarily come from intellectual-property lawyers.

Since many of these lawyers generate much of their revenue from foreign entities engaging their services to file trademark applications in Jamaica, they fear the loss of income that would result from our adoption of the Madrid system.

Other concerns that have been raised include the potential influx of foreign brands into Jamaica that may reduce Jamaican companies' competitive advantage.

It should be noted that the Madrid Protocol is not a panacea against fraudsters and brand pirates. As a consequence, the protocol will not eliminate the need for intellectual-property lawyers. A simpler system will encourage more of our entrepreneurs to engage the system of registration for brand protection in multiple jurisdictions.

This will mean more potential clients to represent in more jurisdictions. It may also mean a greater focus on enforcement of laws rather than registration. That concentrated focus could be good for our entrepreneurs and the earning potential for Jamaican brands.

The Madrid Protocol should be a growth enabler and can be implemented at little cost to the Government. Hopefully, the Government will heed the call for implementation.

Senator Chris Tufton, PhD, is opposition spokesman on foreign affairs and trade, and investments, and co-executive director of CaPRI. The views in this column do not necessarily represent those of the above-mentioned entities. Email feedback to columns@gleanerjm.com and cctufton@yahoo.com.