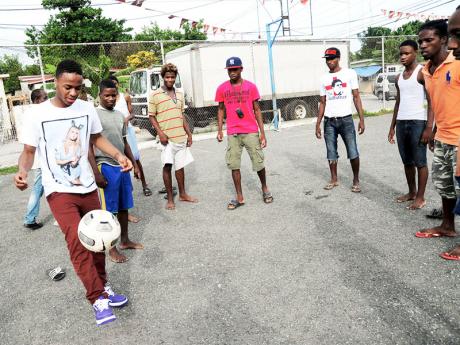 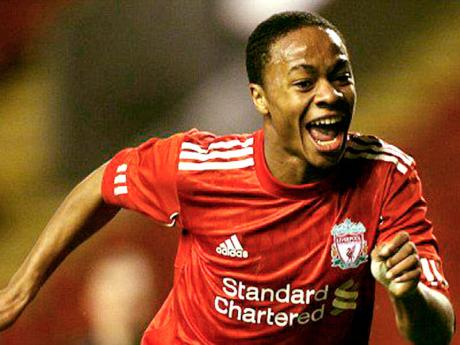 He is only 17 years old and hails from the tough Corporate Area community of Maverly, but Raheem Sterling rubs shoulders daily with football superstars, including Jamie Carragher, Luis Suárez and the England captain, Steven Gerrard.

He is quickly becoming a fan favourite at Anfield, the home of one of the biggest football clubs in the world, Liverpool FC, and has already represented England in a number of age-group tournaments.

But, months away from his 18th birthday, he remains the shy unassuming young man who left Maverley in Kingston 20 just over 10 years ago.

Sterling returned to Jamaica recently to attend the funeral of his grandfather, and were it not for the large group of young men trailing behind him one would never know that he has already attracted a £300,000 (J$40 million approx.) transfer fee.

His presence in Maverley over the past two weeks gave the community a huge lift as the young men saw one of their own - one whom they played street scrimmage with - emerging as one of the rising stars in world football.

They hung on to his every word, even though he did not say much, and tried to copy his every move as they juggled a football in the park metres from the house on Reapers Road where he spent his early years.

"He is definitely a positive influence," his mother, Nadine, told The Gleaner more than one year ago.

"He was born and bred in Maverley and I have even started suggesting to him that when everything is settled and the time is right, it would be great for him to go back to Jamaica, to his former school in particular. and talk to the kids about not giving up on their dreams and working hard for success and stuff like that," Nadine said at the time.

Last week the time was right, and Raheem's influence was clearly obvious as the young, and even the not so young, dusted off their football boots.

"The 'Big Man' is here and we so proud of him," one elderly man declared as he announced that he watches every Liverpool match in the hope that "Raheem gets even five minutes on the field".

"When Chelsea buy me, and me and Raheem clash, a that time you a guh see ball play," declared a young boy no more than 12 years old.

Sterling took the adoration in his stride, as he has done most things since he came to national prominence in England while at the Queen's Park Rangers (QPR) academy.

"It is good playing with players like Steven Gerrard and Jamie Carragher," Sterling told The Sunday Gleaner as he spoke about breaking into the Liverpool first team last season.

"There was one time I came on and they were giving me the ball to say go and attack the fullback, so it was good to know that they had confidence in me and see me as a young player who is good enough," said the speedy and skilful winger.

Breaking into the Liverpool first team was a development that has helped to boost his confidence.

"I have travelled with the first team down to places like Arsenal in the past, but I did not make the bench or anything so it was good to go on," said Sterling of the March 24 game against Wigan when he became the club's third-youngest player of all time.

That was the high point of a football career which started when he was a 10-year-old playing for a Sunday league team before he was snapped up by QPR and taken to its youth academy.

He started playing for England at the under-16 level and since then has represented every English age-group team, including the under-19 team which he played for this year.

"Hopefully, this season I will make a full breakthrough for the Liverpool first team and see where it goes from there."

He is contracted to Liverpool for two more years, but has no plans to leave the club anytime soon despite its decision to replace its cult hero and manager, Kenny Dalglish, for next season.

"He (Dalglish) is the one who gave me my debut, so I am grateful for that. To make my debut for Liverpool at 17 is quite an achievement, so I am happy that he had faith in me."

But Sterling has no concern about new manager Brendan Rodgers.

"It's actually quite a good trade because he wanted me to come down to Swansea on loan (last season), so he is a good manager."

Sterling returns to training with Liverpool on July 4, having enjoyed his time in Jamaica, to begin preparing for a season, hopefully better than last year when the club finished down the table with one trophy to show.

Will he return to represent the Reggae Boyz at any level? This is the question on everybody's lips in Maverley, but that is one issue Sterling is staying away from right now.

His mother, however, long ago, made it clear that seeing him in the black, green and gold would be her preference.

Speaking to The Gleaner in that 2011 interview, Nadine expressed a desire to see her son turn out for his native country, but if the English have any say, it is the red and white of 'The Three Lions' that he will continue to wear for a very long time.