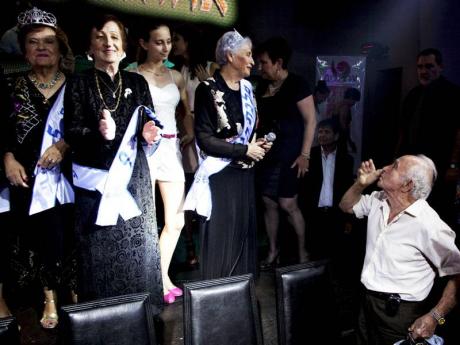 A man sends a kiss to Holocaust survivors participating in a beauty pageant, in the northern Israeli city of Haifa, Thursday, June 28. Fourteen women who lived through the horrors of World War II paraded onstage in an unusual pageant, vying for the honour of being Israel's first 'Miss Holocaust Survivor'. - ap

Grinning and waving, 14 women who survived the horrors of World War II paraded last Thursday in an unusual pageant, vying for the honour of being crowned Israel's first 'Miss Holocaust Survivor'.

Billed by organisers as a celebration of life, the event also stirred controversy. In a country where millions have been touched by the Holocaust, many argued that judging ageing women who had suffered so much on physical appearance was inappropriate, and even offensive.

"It sounds totally macabre to me," said Colette Avital, chairwoman of Israel's leading Holocaust survivors' umbrella group. "I am in favour of enriching lives, but a one-time pageant masquerading (survivors) with beautiful clothes is not what is going to make their lives more meaningful."

Pageant organiser Shimon Sabag rejected the criticism, saying the winners were chosen based on their personal stories of survival and rebuilding their lives after the war, and physical beauty was only a tiny part of the competition.

"The fact that so many wanted to participate proves that it's a good idea."

Nearly 300 women from across Israel registered for the competition, and contestants were whittled down to the 14 finalists who appeared Thursday.

The contest, part of Helping Hand's annual 'cultural' night, included a lavish dinner and music at a Haifa reception hall. Some 600 people attended, including two Cabinet ministers, Moshe Kahlon and Yossi Peled, himself a Holocaust survivor.

The women, ranging in age from 74 to 97, clearly enjoyed themselves. Wearing black dresses, earrings and necklaces, and sporting blue-and-white numbered sashes, they grinned and waved as they were introduced to the adoring audience. Music played as the contestants walked along a red carpet, introduced themselves and described their memories of World War II.

"I have the privilege to show the world that Hitler wanted to exterminate us and we are alive. We are also enjoying life. Thank God it's that way," said Esther Libber, a 74-year-old runner-up who fled her home in Poland as a child, hid in a forest and was rescued by a Polish woman. She said she lost her entire immediate family.

"This place is full of survivors. It puts us at the centre of attention so people will care. It's not easy at this age to be in a beauty contest, but we're all doing it to show that we're still here," the silver-haired Hershkovitz said.

Wearing a glittering tiara, she was joined by her granddaughter, Keren Hazan. "I'm very proud of her because she's the most beautiful woman in the room tonight," Hazan said.

"We always tell them to dress well and look good. To think positive and to take care of themselves," Sabag said. "Always look at life with a smile and continue to live."