'Chiney Dolly' - glam behind the wheels 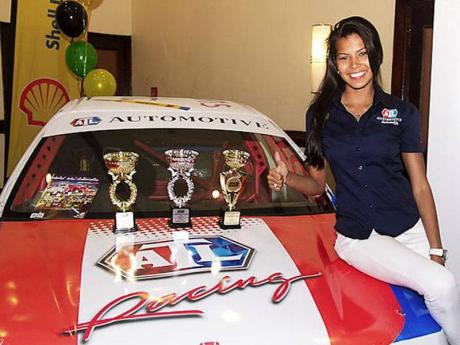 Natasha 'Chiney Dolly' Chang has returned to Jamaica's motor-racing circuit, a move that was eagerly anticipated by sport fans.

Assuming the the nickname 'Chiney Dolly' many years ago because of her youthful resemblance to a Chinese doll, Chang developed a profound love for cars at a young age when surrounded by her father and grandfather's classic Jaguars. This love deepened after she and her friends spent time watching drag racing.

She made her racing debut at the Palisadoes international speedway in 2006 before acquiring a Group N Rally car, a Mitsubishi Evo 5, making her the first female in the Caribbean to campaign a turbo-charged four-wheel-drive rally car. Her rally debut in Jamaica saw competitive seventh overall and fourth-place finishes in Group N before competing in Rally Trinidad in 2009 where, despite minor car problems, she placed 12th overall and fifth in class on her way to becoming a firm favourite amongst fans.

In the following campaign in 2010, Chang campaigned the Evo in several Jamaican rallies, continuously leading her class before trying hand at circuit racing by entering IP33 and winning.

Though blessed with model good looks, she completes circuits dominated by men. Despite her youth, Chang is already a well-respected member of Jamaica's tight racing community.

"As a woman in racing, you have to be strong both on and off the track. Racing has been the best and one of the worst things that have ever happened to me - being a female, not in only racing but in the car culture, you are faced with many negative stereotypes and it gives me a certain satisfaction to prove any doubters wrong," Chang admits.

"Racing is a hunger. Once you've tasted it you will always crave it. No matter your gender, your age, your race, the beauty about racing is it is the only sport in the world that we all compete equally," she adds.

A native of Kingston, Chang spends her professional life as close to the buzz of cars as she does in her personal life in her role as sales and marketing manager at ATL Motors. There, her talent lies as much in the car showroom as it does on the track. On the job, she has won numerous international awards for sales and service - a fact that brings her much pride.

"Jamaican circuit racing has skyrocketed in recent months and an addition such as Chang not only broadens the appeal even further but encourages the nation's youth to get involved. We're delighted to play a part in her renaissance and now, with Doug 'Hollywood' Gore, we can boast two of the best drivers in the country, " commented Adam Stewart, CEO of ATL.

Chang who owns a small automobile detailing company, Dolly's Detailing, is currently undertaking additional work to her car in preparation for the July 29 meet at Dover, where she plans on putting on another good show.