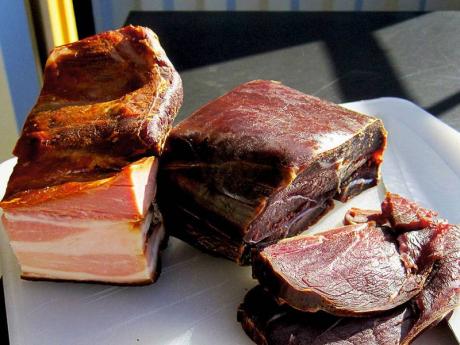 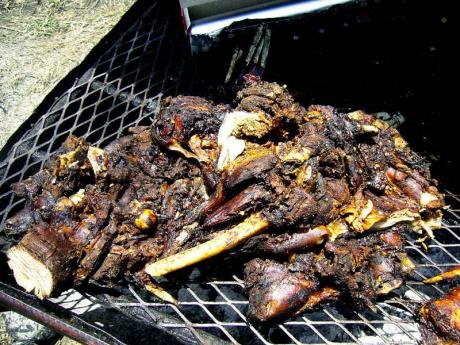 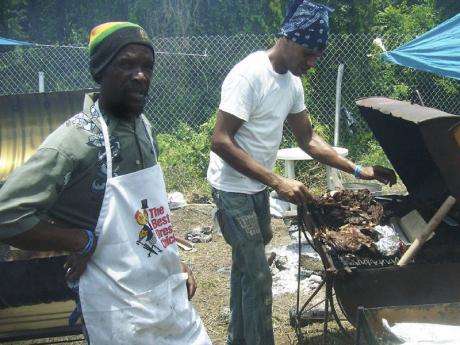 Kevon Bell tends to his jerked reindeer, while his colleague David Bald looks on at the Portland Jerk Festival, on Sunday, July 1. photos by Paul williams
1
2
3

The only meat on my mind on the way to the Portland Jerk Festival on Sunday, was reindeer. Yes, reindeer. There is nothing exotic about pork, chicken, lobster, and beef, and why go all the way to Portland for the commonplace? Yet, the first thing I ate was fried fish and wholewheat bread. Just couldn't pass that by in the little cookshop at the foot of the hill where the festival was held on Folly Estates.

And as soon as I reached the first booth in the row, I started to ask for reindeer meat. Some vendors laughed, some looked at me shockingly. Others simply didn't bother to answer. I wasn't moved by their nonchalance. I knew what I was about.

Stories about the reindeer of Portland abound in that part of the island, and I got the feeling that the meat would be on offer at the event billed as 'The largest food festival in the Caribbean'.

My luck came early when, upon reaching Fisher Boyz' booth, I heard the grand announcement, "Jerk reindeer, jerk rabbit ..." My excitement went into overdrive. I asked where the reindeer was, and was shown something on a grill that could be any animal. I questioned the authenticity of the meat and was given a piece to sample. I paused for a while, took a deep breath, and then a bite. A young woman in the booth smiled. She knew I was sceptical.

I don't know whether it was the meat or the flavour, but something that I liked exploded in my mouth. It tasted like cattle, hog, and goat, all in one. The skin was as gummy as cattle's, but not as thick. Then my camera went clicking, questions were now being posed, and notes being taken. I even had to change 'rain deer' on the menu to reindeer. There I was, in and out of the booth, getting into the way of the two 'jerkers', David Bald and Kevon Bell. For there was also a jerked rabbit on its back. Mouth-watering in death it was.

Having satisfied myself that it was in fact reindeer, I asked the price per pound and was bowled over. For a moment, the idea of becoming a reindeer hunter popped up, because the price was much more than what I will be paid for this story, if it is ever printed. So, I ordered only quarter pound, and that was what I munched on for the entire day, bones and all. I'm not a great eater of meat, but this reindeer had me in a corner.

While Bell was taking a break from the heat, I got to to talking with him about the reindeer and its presence in Portland, and he corroborated the stories I have heard over the years. The only thing I didn't find agreeable was that he said the reindeer tasted like lamb. I have had lamb before, but that was years ago, so I gave him the benefit of the doubt.

The reindeer proliferation started after 1988 when Hurricane Gilbert destroyed a cage in which a male and female white-tailed deer (odocoileus virginianus) were housed. They escaped into the bushes and their offspring are now sighted in places such as Mount Pleasant, Industry, Shrewsbury, Content, Darley, Little Spring Garden, Eden Wood, Paradise, and Swift River, all in the parish of Portland. Pumpkin, carrot, yam and corn are among the foods they eat.

Some Portlanders are worried stiff about the destruction of their crops by these herbivores, others, the carnivores, can't get enough of this 'delicacy', which is very expensive and much sought after. There was even the story in the news, a few years ago, of a man who was killed in an altercation over reindeer meat, which is prepared slightly different from other meats when it is being jerked.

The meat is seasoned before it is boiled. It must be boiled, said Bell, because "it will be dry and hard". On Sunday, he said he had boiled the piece from which I had eaten for two hours. After it is boiled, it is cooled, sliced and seasoned again, before it is put on to the grill. Two more hours and it's ready. And to justify the price, Bell said, "Is only Portland alone it come, and it's nice!"

It's not just any jerked meat, it's the much-sought-after, white-tailed reindeer from Portland, Jamaica, and was done by the Fisher Boyz of Portland at the Portland Jerk Festival on Sunday, July 1, at Folly Estates.