Jamaica to be rebranded globally 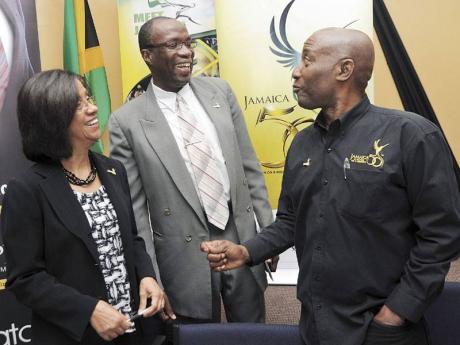 Robert Bryan, project director of the Jamaica 50 Secretariat, is looking forward to this year's Independence celebrations bringing Jamaicans closer together.

"We want to use the opportunity to try and stimulate a whole recommitment to Jamaica, and to stimulate a thought process about the values that have brought us to where we are and to use the opportunity to seek to unite the country," he declared yesterday as the secretariat outlined plans for the Jamaica 50 celebrations in Jamaica and the diaspora.

Bryan provided specifics on the Jamaica 50 Golden Jubilee Village at the Independence Park Complex and Jamaica House, and the Jamaican camp inside the O2 Arena in London, just five miles from the Olympic stadium. He said the plans would be a platform to rebrand Jamaica globally and it would be done in a way to capture world attention, delivering maximum impact of the brand worldwide and to attract international television coverage. Ultimately, he said, Jamaica hoped to convert the exposure to financial gains, including more visitors and greater publicity for Jamaica's products.

"We have always felt that the celebration has to be about substance. So the celebrations are not necessarily just parties. The whole theme of this is to be a sober reflection ... that looks at all the pillars of the society," he said.

The main celebratory period is from August 1 to 6 with the focus on the village, which will be the headquarters of the celebrations.

Bryan promised periods of programming between noon and 1 a.m. on August 5 and 6. He said it would combine live feeds of what is happening at the various Jamaica 50 sites, interspersed with previously recorded footage, including the Jamaica Military Tattoo 2012.

Inside the O2 Arena, Jamaica has four different platforms in the area, including an area for live shows, a piazza for the official flag raising on August 6 and the Jamaica Retail Shop, which is also expected to be a hit with patrons.

Bryan said the plans for Canada and the United States had not been finalised, but there would be an event in Ft Lauderdale, Florida, two events in the New York tri-state area and an event in Toronto, Canada.