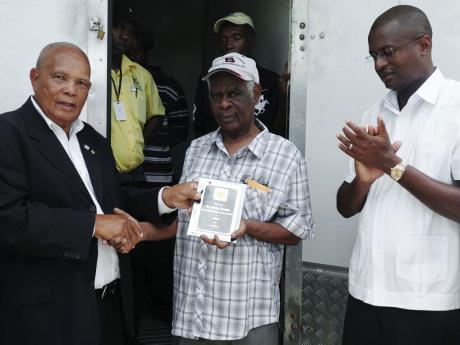 Bobby Pottinger (left), custos of St Mary and immediate past president of All-Island Banana Growers' Association, presents Wesley Fowles, veteran banana farmer, with a plaque for his years of service. Ian Hayles, minister of state in the Ministry of Agriculture and Fisheries looks on. -Photo by Mark Titus

WESTERN BUREAU:Contrary to a demand by the European Union (EU) for the reduction of customs duties on imported goods from that region, state minister in the ministry of agriculture and fisheries, Ian Hayles, is calling for an immediate cutback in the volume of produce imported into Jamaica.

"In the Ministry of Agriculture, we are doing everything in our powers to cut imports in this country. If we are going to survive any at all, we will have to," Hayles said.

Alexander Walford, policy officer in charge of Caribbean-EU trade relations, suggested recently that Jamaica's failure to honour an agreement signed in 2008 under the Economic Partnership Agreement (EPA) could tarnish the country's reputation.

But Hayles, who was giving the keynote address at the recent annual general meeting of the All-Island Banana Growers' Association (AIBGA) at the Springfield All-Age School in St James, called on the farmers to adopt to new technology in order to fill the gap resulting from a reduction in Jamaica's food import bill.

"Whatever differences we have with Europe, we have always found a way to resolve them," a more cautious Hayles said after his presentation. "It is more a policy decision, and that is one that must be made by the Cabinet."

The EU representative said the agreement made provision for arbitration and the settling of disputes, and recourse through which those provisions may be sought if the situation remains the same.