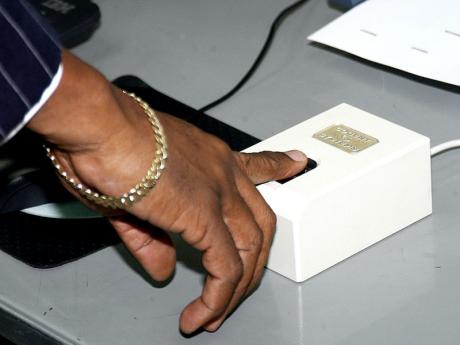 Checks made by The Sunday Gleaner have revealed that in some cases when employees refuse to give their fingerprints they are threatened with dismissal.

The practice has been implemented by companies on the basis that they have to protect their bottom line by eliminating the time-card system that has been abused by some employees who punch a colleague's time card when that colleague is absent or late.

Under Jamaican law, a person can only be compelled to provide fingerprints in specific criminal matters. The law also allows an individual the right to refuse to give fingerprints.

Section 3A of the Finger Prints Act states that "where a person is taken into custody on reasonable suspicion of having committed an offence, that person's fingerprints and photograph ... shall not be taken unless the authorised officer informs the person of such matters as may be prescribed, and that (the person) has the right to refuse to have his fingerprints and photograph taken".

"From a legal point of view only a judge can order my fingerprint," said Samuels.

However, he explained that employees could find themselves in a bind if the trade union representing them signs an agreement with the company consenting to the provision of the fingerprints.

Employees who do not wish to give fingerprints will have to leave the union.

Samuels also advanced that if an employee refuses to give fingerprints that cannot be viewed as justifiable grounds for dismissal.

"I would challenge that because it has nothing to do with performance … a job is a contract and that (refusing to give fingerprints) can't be a breach of the terms of employment," argued Samuels.

Senator Mark Golding, minister of justice, concurred that an employer could not lawfully dismiss an employee for refusing to be fingerprinted, especially if the contract of employment doesn't categorically state it as a condition of employment.

"There are different employment situations. In most instances, I can see absolutely no justification for fingerprint requirements," said Golding.

Berger Paints Jamaica Limited is currently working on implementing its biometric time-clock system and has required staff to provide fingerprints.

The effort has been met with resistance by some employees.

In a memo issued to the staff recently, Berger's regional managing director, Warren McDonald, admitted that "a number of employees have expressed concern regarding the security and integrity of the new system".

McDonald told the employees that access to the database of fingerprints would be restricted to him, the information technology officer and the financial controller.

He also stated that "appropriate security measures have been put in place to safeguard the equipment", and sought to assure the employees that "the data will not be shared with any individual or organisation external to Berger Paints ... ."

"The data collected will be used only for the purposes intended, which are recording of attendance and processing of the payroll. On the basis of the above, arrangements will now proceed for the implementation of the system," McDonald said in closing the memo.

However, sources close to the company told our news team that some employees are still concerned about whether Berger's parent company in India will have access to their fingerprints.

The employees have also reportedly raised concern about what would happen to the prints if they leave the company.

The source also revealed that some employees are disgruntled as managers are exempt from providing their fingerprints because they are "not on the same pay scheme … and do not work overtime".

When our news team contacted McDonald, he said we should speak to larger establishments that are using similar systems before the telephone call ended abruptly.

"There was some resistance but after explanation it was smooth sailing," Shurland told The Sunday Gleaner.

He said the system was needed to end the buddy punching practice that had caused the company to pay out money for hours not worked.

According to Shurland, the Tank-Weld employees were asked to provide only a thumbprint.

Another company that has asked employees for a fingerprint is K S Chemical Distributors Limited.

An executive at the company, who asked not to be named, said there was no opposition to the system because the staff was advised in writing back in 2008 that the paper-based system would be replaced by the new electronic system.

The executive said the prints collected from employees are "stored in the time clock and that's it".