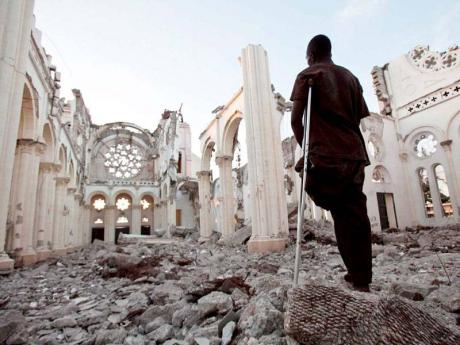 Icaris Celnet stands in the ruins of The Cathedral of Our Lady of the Assumption, often called Cathédrale de Port-au-Prince, Tuesday, January 11, 2011, on the eve of the one-year anniversary of the earthquake that killed an estimated 230,000 in Port-au-Prince, Haiti. - FILE

Haiti has seen a demand for private security companies grow since the 2010 earthquake and those same firms are training more agents to keep up with the boom, a Canadian think tank announced Monday in a new report.

The study by the Centre for International Governance Innova-tion notes that the growing demand coincides with a "subsequent spike in international engagement" - a reference to the foreign groups that arrived in the country in the aftermath of the January 2010 quake.

Haiti's market for private security is likely to grow at least as rapidly as the global rate of seven to eight per cent annually, the report said.

The jump in the number of private security firms in the Caribbean nation is part of a larger trend worldwide, said the report's author, Geoff Burt, vice-president at the Security Governance Group, a consulting firm that focuses on security issues in fragile and conflict-prone countries.

"We're coming to realise that security around the world is being provided by more actors than we realise," Burt said by telephone while on a trip in the Haitian capital of Port-au-Prince.

"Private security guards are a part of everyday security provisions in the world."

In Haiti, the presence of private security guards has become a commonplace sight. The shotgun-toting men and a few women can often be seen standing outside banks, supermarkets and at the gates of mansions in the hills above the capital.

That the security guards are so visible seems inevitable given that the national police force has only 10,000 officers in a country of 10 million, and the bulk of them patrol in Port-au-Prince. A United Nations missions, and its now 10,480 peacekeepers troops, has helped provide security since 2004.

The new study notes how the private security firms are a relatively recent development.

Such businesses were banned under the Duvalier dictatorship that ended with the 1986 overthrow of despot Jean-Claude 'Baby Doc" Duvalier; security then was enforced by Duvalier's private militia, the feared Tonton Macoutes. And it wasn't until former President Prosper Avril issued a decree two years later that such groups could legally work.

The security companies in Haiti now follow a decree amended in 1989.

The report also notes how such factors as "Haiti's extreme economic inequality and fears of kidnapping for ransom have left wealthy Haitians anxious to protect their property and their homes."

Citing Haiti's Interior Ministry, the report notes that 41 private security firms are registered to work in Haiti. The size of the companies ranges from about 2,000 agents to fewer than 50.

The number of guards working for licensed private security firms is about 12,000, slightly bigger than the current police department's force of 10,000 officers.

International organisations such as the United Nations peacekeeping mission and the Western embassies are the largest clients of private security firms in Haiti, industry leaders told researchers. The owners of such companies indicated that international clients account for about half of their business.

The other big customers include banks, non-profit organisations, schools and businesses and private residences.

About 80 per cent of the business is in Port-au-Prince.

The report by the Centre for International Governance Innovation, an independent, non-partisan think tank, was released in June but was not announced until Monday.