The bligh we should not give 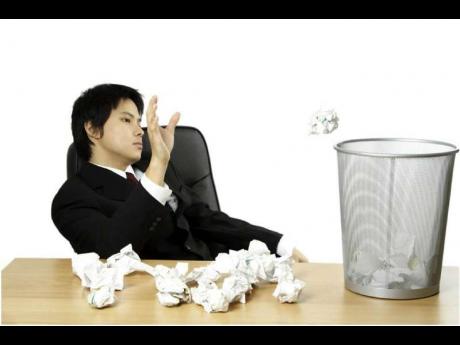 One of the ways that we Jamaican professionals encourage organisational slackness is by easily forgiving the sin of unanswered emails, phone calls and text messages.

We pretend as if it never happened, and rob the offending individuals of some important information: the damage that occurs to their reputation.

We have our favourite reasons why this happens; here are four:

1. 'Dem nuh have no manners'. This is our first response as we shake our heads in disbelief at their failure to reply. We start to think that something must be wrong in the way they were brought up.

2. They must be busy. Always too busy. This is just code language for what we really think: "Dem cyan manage." We imagine that they have items falling through the cracks all over their lives, not just at work, and, in our enlightened moments, we don't take any of it personally. That doesn't mean that we don't form an impression however, and in the workplace some recent research showed that even your inability to manage the stuff on your desk has an impact: nearly 40 per cent of employers say piles of paper covering a desk negatively impacted their perception of that person.

3. Unprofessional. We believe that they have just not learned the basic etiquette of business and how it relates to the bottom line. Business relationships, like any other, are built on trust, and they aren't smart enough to see the link between returning calls and the company's success. We tell ourselves that 'who cyan hear mus feel' and know that we'll think twice when they send us their messages and need an urgent response.

4. Sometimes the recipient doesn't know how to answer the
message because it causes them real difficulty. They don't know how to
respond, which means that it just sits there, waiting to be dealt with
at some future point which never comes. The sender has no idea whether
or not the message was even received.

Whatever the
cause might be, the effect is the same. Those who don't respond do
damage to their working reputations and relationships, and we, the
innocent bystanders, join in the game by not revealing the consequences
of their actions.

By withholding this information, we
leave them in the dark thinking that we are just being patient, when in
fact we might be fuming.

We can, however, intervene
and sometimes save the day without being nasty about it and losing them
as friends or colleagues.

Step 1: Share this article
with them. Be aware, however, that when you send it via email it might
end up with all your other messages; ignored and waiting to be
read!

Step 2: Have a conversation. If you prepare for
it well, it might not fulfil your worst fears. I recommend focusing on
the consequences of their lack of responsiveness, and that you stick to
the simple facts. To further ensure the success of the conversation,
practise with a colleague beforehand.

Step 3: If they
agree that they do have a problem, help them look for the right
solutions. Show them that their system for managing their time probably
requires an upgrade, as the number of messages that they receive has
overwhelmed their current methods.

Indeed, they need
to examine their current habits, practises and rituals with a view to
changing them slowly but steadily.

One simple practice
to adopt is that of acknowledging all non-spam email if they can't
reply to it immediately. Also, help them put in place a habit change
support system that prevents them from slipping back to the beginning
once they start to implement the improvements.

Share
with them the new goal of many professionals who receive high volumes of
email above the average of 137 per day. It's called the 'zero inbox'
and the idea is to treat your Inbox like a kitchen sink - a place for
temporary storage of unprocessed items that is immediately emptied once
the items have been cleaned up.

This final step is the
most potent, because it gets to the heart of the problem they are
likely to be having. It's tough to implement, but if you can help them
to get there you will have stopped giving them a bligh and started them
on the road to saving their reputation.

Francis Wade
is a consultant with Framework Consulting. Send feedback to
columns@fwconsulting.com