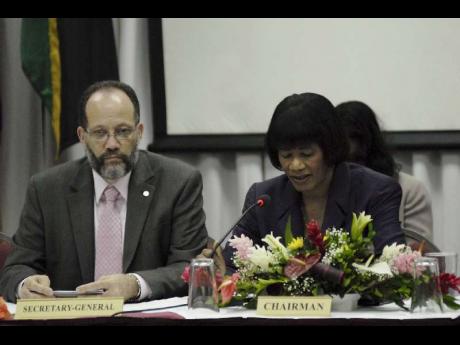 Caricom Secretary General Ambassador Irwin LaRocque and Prime Minister Portia Simpson Miller are seen here at the 23rd Meeting of the Prime Ministerial Subcommittee on External Negotiations in Gros Islet, St Lucia, on July 3, during the latest Caricom Heads of Government Summit. FATCA did not come up during the summit. - File

In 2010, the United States Congress enacted legislation that has the effect of extending the reach of US tax law to the Caribbean and all other countries.

Although the full and final detail of its implementation has yet to be spelt out, its impact is likely to be particularly acute on the large number of citizens holding dual US-Caribbean nationality who hold bank accounts or investments in the region.

The legislation in question, the Foreign Account Tax Compliance Act, or FATCA, is one of a growing number of US laws that are extraterritorial in effect and have been introduced on the grounds of security, to counter terrorism and organised crime, or to address tax evasion.

While this intent is to be applauded, it has the effect of extending US jurisdiction into the Caribbean and imposing strict and expensive obligations on governments, companies and institutions.

It also carries with it, as has been demonstrated in a number of high profile cases elsewhere in the world, the possibility that it will be used to extend the reach of US law in a catch-all way in areas that the legislation was not primarily designed to address.

For a region normally obsessive about defending its and its citizens sovereignty, the reaction from Caribbean governments to FATCA has been surprisingly muted given the bill that introduced it came into being so long ago.

Moreover, the absence of any language on the issue emanating from Caribbean Heads of Government meeting a week ago in St Lucia is surprising given that a prior meeting of ministers of finance was reported to be discussing the matter and sending their conclusions to the heads for consideration.

The FATCA is intended to 'detect, deter and discourage offshore tax evasion' by requiring, in part, all financial institutions in any part of the world, to identify from January 2013 on whether their customers are 'US persons' or foreign corporations with substantial foreign ownership.

Under the FACTA legislation, anyone with dual citizenship with the US, an American citizen living outside the USA, the holder of a US passport, someone born in the US, a green-card holder, or someone who has substantial presence in America - meaning a person who was present in the US for at least six months - is liable under the law to be reported on to the US authorities by Caribbean financial institutions.

If they are, then the institution must inform the US Internal Revenue Service of their names, tax identification number, and any savings they have in any financial institutions in excess of US$50,000.

Apart from the measure extending US law to the Caribbean and other parts of the world, it also has a compliance cost to Caribbean financial institutions, will likely impact on government revenues, will change the offshore financial services environment in the region and impose on institutions the danger of reputational risk for failure to comply fully with US requests.

There are also suggestions that when fully implemented by the US Treasury, it could have a chilling effect on correspondent banking relationships, on account opening, loans, and quite innocent transactions.

So far, the majority of public commentary in the Caribbean has come from bankers, management consultants, lawyers, accounts and tax advisers who have focused on the transactional costs and the need to institute complex reporting procedures.

However, there are much bigger political issues associated with the legislation about which governments have said very little.

These relate to the extraterritoriality of the legislation, the potential for conflict with local laws in some Caribbean jurisdictions on privacy and data protection, and the fact that some Caribbean people may have to undertake the Kafkaesque process of somehow proving they are not a US citizen.

There is also a problem in some Caribbean nations where laws may have to be enacted or changed to enable compliance.

What makes this new US law so insidious is that it touches on an issue that most in the region are reluctant to talk about openly: the number of individuals who hold dual citizenship, and how many Caribbean citizens, including politicians, hold passports from elsewhere or have the right of residence in the US or other countries.

In recent years, the US, sometimes with European agreement, has been legislating in ways that seem to have as a subtext ensuring in the longer term regulation and rules are made in the image of US thinking.

As the global balance of power changes and cybercrimes and new forms of criminality and warfare develop, it is likely that this desire on the part of the US for new forms of extraterritoriality will expand significantly.

Already the US is talking about greater use of unmanned surveillance drones in Caribbean airspace for security-related tasks; is taking a greater interest in regional cyber security; and, more generally, is seeking greater compliance in information sharing by offshore financial centres in the region.

All of this is happening now and, while in many of its aspects, it may support the region's own economic or security concerns, requires clear Caribbean thinking about what it is and is not prepared to accept, why and how best such extraterritorial issues might best be addressed with a powerful neighbour.

David Jessop is director of the Caribbean Council. Send feedback to david.jessop@caribbean-council.org.