From colony to Independence (Pt 1) 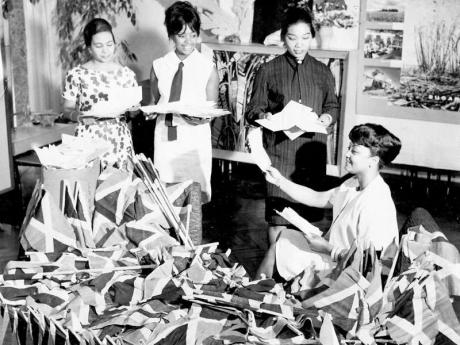 Surrounded by the first batch of a special consignment of 5,000 national Independence flags at the Jamaica Government Office, four women sort out some of the applications for flags which have poured in from all parts of Britain.

The vesting of the Government of Jamaica with Independence is perhaps known to very few people of the country given the 50-year passage of time since the great event. Accordingly, I have selected for publication here the two relevant passages from my autobiography: My Life and Leadership, which cover the enactment of Independence.

I was a member of the committee established by the House of Representatives for the design of the Jamaican flag and the national anthem. The proposals submitted for the flag, in my view, were uninspiring. I objected to any design using red, white and blue. All ex-colonies of Britain had avoided flags which were similar to the Union Jack. I felt that the committee should move in a new direction.

Eventually, a design was submitted with gold, green and black horizontal stripes, black in the middle, gold on either side and green bands at the edge (MP 23/1962). This design was submitted to the House of Representatives to be approved, cleared and submitted to the Queen for assent. Despite royal assent, however, there were notable similarities between the flags of Jamaica and recently independent Tanganyika, which could cause confusion. This led to a change in design, but not of colours. The horizontal black bar would become diagonals and the four triangles created would be coloured two in green and two in gold (Ministry Paper 32/1962).

The colours were interpreted as hardships there are (black), but the land is green (green), and the sun shineth (gold).

Early arrangements were made to discuss the steps necessary to make the celebration of Independence "the greatest single historical event of the foreseeable future" (MP32/1962). Even before the general election, government had set up a Standing Consultative Committee, including members from both sides of the House of Representatives, to which another committee, the Independence Celebration Committee, would report. This latter committee had no executive powers. It was expected to submit proposals for the wide range of activities to be planned for the events.

These proposed events would provide very comprehensive coverage. Heading the list of official functions was the opening of Parliament by Princess Margaret to inaugurate the Independence of Jamaica.

... Because of the numbers and cost involved, each invitation was limited to one delegate, except the Royal Party and the delegation of the United States (US).

Another factor was the lack of first-class rooms in the capital city, Kingston, where only three hotels of suitable accommodation existed: the landmark Myrtle Bank Hotel on the waterfront, the Courtleigh Manor Hotel and the newly built Sheraton Hotel in New Kingston, rushed to completion for the occasion.

Military parades, marches, tattoos and a flyover were provided by visiting naval detachments from the United Kingdom, Canada and the US.

Fireworks were launched across the island, with the main exhibition at the flag-raising ceremony in the National Stadium at which the highlight was a closing pyrotechnic display of the national flag.

On select mountainous high points, bonfires were lit to be seen for miles where these would not constitute fire hazards.

Special features on Jamaica were published in The New York Times and London Times.

Independence was celebrated as the first Monday in August, replacing the
traditional August 1 Emancipation Day as the new
freedom.

Another early decision to facilitate makers
of souvenirs was the selection of the national motto and coat of arms.
This was done by the Independence Celebration Committee in April 1962,
chaired by Theodore Sealy, editor of The Daily
Gleaner. The proposal was 'Out of Many, One People'. It met
with some dissent from people who considered that it was not a
declaration of reality. But it was also capable of two interpretations
by expressing it as a hope for integration of the society. Both Norman
Manley and Alexander Bustamante agreed to the selection. This cleared
the way for a new coat of arms to be selected, replacing the irrelevant
motto then in use, 'Indus uterque serviette uni' (The Indians twain
shall serve one Lord) with 'Out of Many, One People.'

Jamaicans
fought no heroic battle to achieve Independence. Earlier struggles of
the working class did occur in 1938, leading to rioting and the
detention of Alexander Bustamante. This led to many steps which had to
be taken to reach independent status. But all these steps were
constitutional advances which were subject to prior discussion and
agreement. This smooth passage ensured progress with certainty, but it
was devoid of the dramatic lustre of a struggle for victory to create a
focal point. Hence, the Independence programme would have to find its
excitement elsewhere. This necessitated the programming of festivities:
street dances, donkey races, regattas and, particularly, music and dance
in as many locations as possible. The repertoire featured traditional
culture, which was more than entertainment. It was a revival of a
heritage that was dying and a promise of more to
come.

The national anthem was also to be selected by
the committee of the House. But here, much confusion
arose.

The debate on the Report of the Committee took
place in Parliament on June 21, 1962, some six weeks before
Independence. The committee was not inspired by any of the 12 entries
sent to it by members of the public who composed songs for the
competition to select a national anthem. But two entries stood out, one
more so than the other.

Because of the short period of
time remaining, it was decided to use a tape recording of the entry
selected for playing to members of the House in the lobby of Parliament
to get opinions on suitability. The recording was without any
accompaniment, which made the rendition very uninspiring. In the chamber
of the House, members were vocally upset at the selection. Some wanted
an entirely new composition.

Need for an
anthem

Robert Lightbourne, whose beautiful composition
had been rearranged and submitted, explained that a new composition was
impossible in a few weeks. Other members said the songs presented
sounded like hymns. One other, Keble Munn, suggested that it was not
essential for an anthem to be composed at this time. Canada, up to that
time, had no anthem. It took Wycliffe Martin, another member, to remind
the House that if there was a flag, there would have to be an anthem,
and we had already selected a flag.

In my contribution
to the debate, I bemoaned the rearrangement of the Lightbourne
composition, which I had heard him play on the piano at this home
several times. I expressed pleasure in "hearing a song which would have
made a beautiful national anthem", and expressed concern that "what we
have heard tonight is, to my mind, a watered-down version of that very
song. Some of the most inspiring passages were omitted, including the
climax that would have stirred the mind and heart. The omission of that
part has made it something less than the best."

But I
went on to urge, "If this is our last chance, then I am prepared to
accept what we heard here tonight as our national anthem, because when
August 6 comes, I do not intend to stand for any other anthem of this
country and I do not intend to stand up for anything called a national
song. If people are dissatisfied with this national anthem, then in the
future it can be changed, but do not call it a national song and ask
people to stand up."

Despite pleadings of the leader
of government business in the House, Donald Sangster, to make a decision
in the interest of time, members would not agree. The House then
adjourned in frustration.

The words for the anthem
were submitted by Father Hugh Sherlock. They were a prayerful petition
in keeping with the deeply religious nature of the country ...
.

Lightbourne's composition was arranged by bandmaster
Warrant Officer John Plant of the Hampshire Regiment, which was
stationed in Jamaica at that time. The problem was that the music could
not fit with the words.

Mapletoft Poulle, an attorney,
who also was a bandleader, was given the music and words to synchronise
in a new arrangement. He was not successful, so he used four bars from
Lightbourne's composition and created a new melody to fit the words. But
he was not able to arrange the composition for rendition by a band.
Major Joe Williams, member of the Jamaica Military Band (later
bandmaster), was given the assignment and successfully arranged the
final version for playing by a band and presented it for submission to
the committee.

At some point before the audition in the
House, a radio station got a tape of a Ted Wade entry and began playing
it on the air as the proposed national anthem. It was arranged for band
and choir. Naturally, this gave the rendition great depth and Jamaicans
were commenting favourably. However, there was one major problem. Ted
Wade was an Englishman, and it was considered inappropriate for the
national anthem to be composed by a non-Jamaican.

When
the members of the House were invited to hear the two renditions on
tape, the Poulle-Lightbourne composition, suitably arranged by Major
Williams, was the more appealing. There were only two weeks left for
Independence.

Great effort had to be put into teaching
an entire nation a new anthem in two weeks. That was my responsibility
as part of my portfolio of culture and information. The assignment was
given to the government public relations office to blitz radio and other
media. This was done with sufficient success to create a lusty
performance from spectators on the night when the national flag was
raised.

The Jamaican anthem was fully accepted by
Jamaicans. It is considered to be one of the distinctively melodious of
all anthems, though not a rousing national
tribute.

But Poulle felt slighted that he had not been
given sufficient credit for the composition, although he had joined
Lightbourne's name to the credits. As a result, he kept the original
score which his family sent to the British Library. It was a regrettable
decision which was never corrected. It is time now to correct the
omissions regarding Mapletoft Poulle and to approach the British Library
for the return of his original score to the land to which it
belongs.

A national song, prayer and oath were
selected for schools; medals were struck to be presented to servicemen;
and Independence Scholarships awarded. A five per cent reduction on all
prison terms, except those serving life, was granted by the Privy
Council of the governor.

The paraphernalia for
Independence was now ready to clothe the new Constitution of a new
nation. Only the formalities remained of the constitutional passing of
regal authority amid pomp and ceremony, applause and cheers of the
people of Jamaica receiving nationhood.

Edward Seaga
is a former prime minister. He is now chancellor of UTech and a
distinguished fellow at the UWI. Email feedback to columns@gleanerjm.com
and
odf@uwimona.edu.jm.