The dancehall emperor is back! 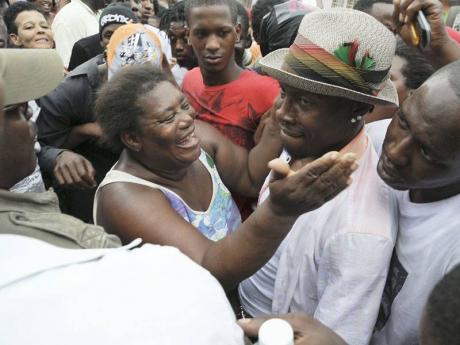 Hundreds of fans gathered at the Norman Manley International Airport yesterday with one intention, to see the dancehall emperor Shabba Ranks.

Just minutes after 11 a.m., Shabba Ranks, who had not been in Jamaica for many years, strolled through the arrival hall to much fanfare and excitement.

While media rushed to get that first shot of Shabba embracing his mother, who he has not seen in four years, fans on the outside waved flags and sounded vuvuzelas in honour of Shabba's arrival.

Shabba's mother, Mama Christie, said she was excited to see her son.

"I feel great, wonderful and I am thankful that God has spared my life after 11 years to see my son Shabba Ranks back in Jamaica to give his people what they deserve," Mama Christie told The Gleaner.

Also accompanying Shabba was his wife, Michelle, and their two sons Rexton Jr and Jahwon.

"I'm feeling wonderful, the welcome is amazing, you can just feel the love. It's just awesome," Michelle told The Gleaner.

"It's always great fi deh inna mi island because, as mi bigger brother seh, when you check it out, nowhere nuh better than yard. This is the land of my birth, this is Jamaica, the land of my birth. Nuh matta wha gwaan, no matter how mi travel the world, nuh matter wha mi do inna the world, mi age paper mark Sturge Town, St Ann," Shabba Ranks told The Gleaner.

Shabba went on to say that the overwhelming turnout of the fans was a blessing.

"This is just the blessing of God. This is just the manifestation of the love whe God have fi him pickney so mi nuh expect nothing more than just love when mi come home," he said

Shabba is scheduled to be the closing act on Friday, International Night 1 at Reggae Sumfest.

Later at Olympic Gardens, where Red Stripe was hosting an event as part of the lead-up to Sumfest and as part of the welcome for Shabba Ranks, it was more of the same.

Shabba moved slowly, not because he wanted to, but because there was nowhere to go, so thick was the crowd of supporters who came to see the legendary DJ.