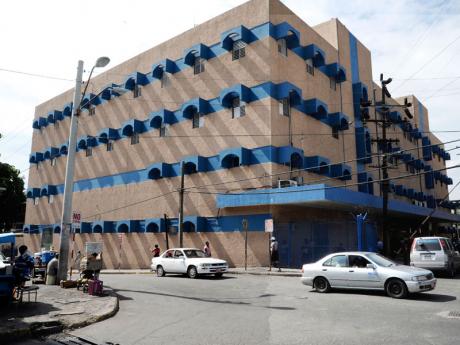 Jamaica's high seat of medicine, the Kingston Public Hospital (KPH), continues to be a mishmash of make-do, workaround and live-with systems that barely manage to serve its huge and very demanding clientele.

A recent Sunday Gleaner investigation conducted on the wards of the country's pre-eminent public hospital confirmed what many believe: the facility is cramped, in shambles and appears to be bursting at the seams.

The shortage of critical caregivers, too few wheelchairs and other support equipment, and the long time patients wait in cramped spaces make it a wonder that the sick can be cured under the conditions at KPH.

During the covert Sunday Gleaner operation, old and infirm patients were seen tied to their beds with pieces of cloth as a means of restraint, which is not in keeping with international best practices.

However, the doctor said the use of cloth to restrain patients was not acceptable because there are restraint mechanisms designed to give proper support to patients.

"But, what they have to work with is the other matter," the doctor said.

Our news team gained access to the KPH after a reporter applied for a job with Lamasa Limited, the company that provides janitorial and porter services to several public hospitals, including the KPH and the Victoria Jubilee Hospital.

During the week-long employment, patients, including the elderly, were seen sleeping on beds that had no linen.

A number of patients were also seen in disposable diapers without gowns.

The stench on some wards was jolting and lingered longer than one should bear.

A janitor assigned to a ward called 'Dung a Gully' because of the notorious stench that once emanated from it said things are not as bad as in the past. "(Then,) you could not pass the ward without getting sick."

As a result, the sick are forced to lie helplessly in their urine- and faeces-soaked diapers until help arrives.

Those who can bathe themselves might not wish to because of the unsanitary state of some of the bathrooms on the wards.

It might prove more hygienic to remain dirty than to try and get a bath in some of the decrepit bathrooms at the hospital.

Years of neglect have rendered the physical facilities at KPH to a state of complete disrepair, despite some renovation and upgrades over the years.

At least one elevator was out of commission and it was scary to ride the creaking ones that are actually working.

Old mattresses soaked with stale body fluids and pieces of discarded equipment were stored in the corner of several wards, adding to the pungent odour and run-down look of the surroundings.

A senior administrative official was overheard remonstrating with a Lamasa supervisor to have the mattresses removed. She lamented that the old beds that had bodily fluids in them were infectious and should be removed with dispatch.

The Lamasa supervisor sought to explain to the administrator that the workers could not move them without approval from the stores.

Pieces of scrap metal were also seen discarded on the property.

The hospital is in dire need of wheelchairs - good ones. Most of the existing chairs are banged up.

During the week-long employment, it was noticed how vital wheelchairs are to the smooth running of the hospital, as many patients cannot walk and have to be carried by porters.

Many of the wheelchairs are falling apart, leaving many wondering how patients don't fall from them. One of the chairs had a dirty cloth tied across the base as a footrest for patients.

One patient who fainted had to be carried in a wheelchair that had a broken back.

A veteran porter explained that the Accident and Emergency (A&E) Unit has 15 wheelchairs and eight stretchers, five of which are used in the cubicles where patients are treated.

He argued that this was ridiculous as the hospital sees scores of patients on a daily basis.

The porter also explained that each ward has one wheelchair assigned to it.

The shortage of wheelchairs was noticeable from the first day of the undercover assignment.

On several occasions, the nurses in the A&E Unit could be heard calling for a porter with a wheelchair, but there was neither porter nor wheelchair because all the porters were busy using the few chairs that are available.

Despite the shameful state of the facilities, there were some bright moments during the week-long visit.

One such moment involved a nurse who accompanied a patient from May Pen and was willing to give him the last $7 of credit on her mobile phone to contact a relative.

Another instance involved a trainee nurse and the care she took while wiping the face of an elderly patient.

Most of the porters and janitors seemed committed to the job. During a conversation, one porter told the reporter that although the pay is little, he loved his job because he was helping others.

"It is a pleasure working with people saving lives. Don't watch the money," said the porter.

But there were times when patients were subject to very unprofessional behaviour.

Expletives were, at times, dispensed more frequently than medication.

A security guard shouted from his post to a passing female that her sex organ "tun up" - of course, not in such language.

Though stationed on the outside of the A&E Unit, his comment could be heard inside the building, where doctors, and nurses were busy trying to save lives.

Patients were also often subjected to the verbal spats between the health professionals and the janitors and porters over work to be done.

On Ward Three North, our news team noticed a window with half of the grille missing and more than half of the panes gone.

A piece of board was being used to cover one section of the broken window, but the space is still large enough to allow a troubled patient access to the roof ledge.

If patients enter the hospital bleeding or in need of urgent attention, they have to provide information to the security guards before they are allowed to see a medical professional.

One porter was heard rubbishing the practice and questioning the wisdom behind it.

He suggested that the questions should be asked of the person accompanying the injured, while the patient should be allowed to get help immediately.

The hospital also seems to be in need of an expansion because on at least one ward, patients had to sleep on beds placed in the corridor to accommodate them.