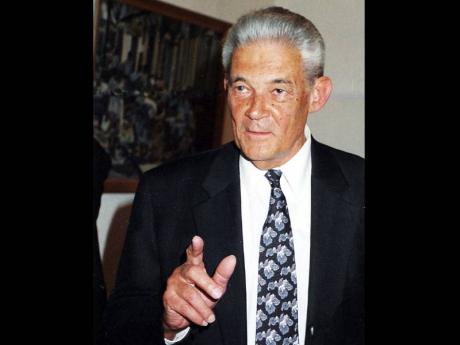 WHY 'TOP 10 greatest Jamaicans'? Well, why not? Fifty years of Independence is a long enough time to reach some agreement about which of this country's sons and daughters have fought for justice and equality, and giving Jamaicans pride in themselves as a people. And is this not a reasonable definition of greatness?

Many will naturally disagree with my judgements. But wouldn't it be a rather boring world if we all agreed on everything all the time? In fact, it would be nice if this list helped to kick-start a national debate on the subject. So the more, 'Yuh is a idiot who don't have a clue what yuh talking bout' responses the better!

My list is based on a fair bit of reading, many on-the-ground conversations, and a few 'who is the greatest Jamaican' John Public polls. My views don't coincide completely with those on the street, but there is much overlap. The greatest difference is probably historical perspective. Most regular folk are too busy getting on with life to think much on the distant past. Only historical dabblers have time to compare what was and what is.

So, who's number 10? Well, let's examine the pros and cons of three potential candidates. They are respectively: the most famous living Jamaican of all time, the most popular prime minister ever, and the person who has probably contributed to more areas of national endeavour than anyone else. Namely Usain Bolt, Michael Manley and Edward Seaga.

Usain Bolt is unquestionably the greatest sprinter in history, and maybe the most famous athlete since Mohamed Ali. Actually, in Ali's heyday most Chinese and Indian peasants - roughly a third of the world population - had no access to outside world news. So Usain is probably more instantly recognisable than any active sportsman who ever lived.

His fame is due not only to his hitherto unmatched speed, but the wonderfully exuberant yardie style in which he wins and celebrates. Which Jamaican's heart has not soared while seeing Bolt decimate the rest of the world, and then making everyone around him smile and laugh? 'Come to Jamaica and feel alright!' He unquestionably makes us proud of ourselves as a people.

Still, he has dedicated his life to simply running as fast as he can, and has not to my knowledge expressed much interest in anything, but being the best he can be in his field. This is not a criticism of a young man who has, all things considered, handled his unprecedented fame marvellously well, so far. But others on this list have consciously fought for justice and equality and the betterment of others.

Michael Manley was certainly one of these. Even today the tone of his speeches still resonate with many Jamaicans. He simply made them feel good about themselves, and raised their sense of self-worth. And he broke down social barriers and championed enlightened laws such as paid maternity leave and the 'anti-bastardy' act. Many also give him credit for being able to go to school and earn university degrees and all the benefits they bring. Every poll taken shows him our most popular prime minister.

Yet, under his 1972 to 1980 stewardship Jamaica's average per capita income fell by more than 30 per cent. His critics bluntly attribute this to economic mismanagement. Sympathisers cite extenuating circumstances like the Cold War and oil crisis. But many other countries in similar situations as Jamaica (e.g. Barbados, The Bahamas, Dominican Republic) substantially improved their material well-being over the same period. Man cannot live by bread alone, but bread is also the staff of life. All fine words aside, the ordinary Jamaican's standard of living declined considerably under Michael Manley's first tenure.

Edward Seaga is the most multi-dimensional leader this country has known, and perhaps no one has influenced independent Jamaica in so many ways: an anthropology pioneer; a driving force behind the popularisation of ska and reggae; an originator of the annual cultural festival; an award-winning poet; one of our best performing finance ministers; the third-longest tenure as prime minister.

Many respond with one word - Tivoli. The May 24 to 27, 2010 events in West Kingston, they say, trace right back to the 1965 to 1966 demolition of Back-a-Wall and building of Tivoli Gardens. Even if not the originator and certainly not the sole practitioner, his detractors charge that Edward Seaga institutionalised the garrison concept, and is highly responsible for all the ills that have flowed thereof.

Many pluses and minuses all around, but a final decision must be made. When in doubt, it's no bad thing to go with the public's choice. So my number 10 greatest Jamaican is Michael 'Joshua' Manley. Let the cheers and boos begin.