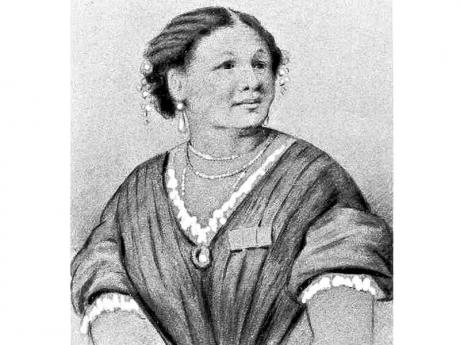 MARY JANE Grant was born in Kingston in 1805 to a Scottish army officer and a free Creole woman. Her mother ran the Kingston hotel Blundell Hall at 7 East Street, and was also a 'doctress' versed in the use of African herbal remedies, a knowledge she passed on to her daughter.

Many of her guests and patients were British soldiers, often suffering from tropical diseases.

In 1836, Mary married Edwin Horatio Hamilton Seacole, rumoured to be Horatio Nelson's godson, who died in 1844. She was an inveterate traveller, and before marrying visited The Bahamas, Haiti, Cuba, Central America and England, where she complemented her knowledge of traditional healing with European medical ideas.

Yet, the medical profession of the time was riddled with ignorance and quackery. For instance, a study of inquests in 1838 showed that 28 out of 100 neonatal infants died, because of the opium used to 'quiet them'. Mary, on the other hand, was said to have once boasted that she had never lost a mother or child. She inherited Blundell Hall from her mother, and when it burnt down in 1843, rebuilt and expanded it. It is now the site of the National Library of Jamaica.

In 1851, she visited her half brother in Panama. Shortly after her arrival, cholera struck, and she pitched in with her expertise. The rich paid, but she treated the poor for free. On returning home to Jamaica in 1853, she was asked by the Jamaican medical authorities to minister to victims of a severe outbreak of yellow fever. She organised a nursing service at Up-Park Camp, composed of fellow Afro-Jamaican doctresses.

She returned to Panama in 1854, and succumbing to the gold fever in the air, invested in a mine. She read about the cholera-riddled British Army in the Crimean War, and 'The inclination to join my old friends of the 97th - and other regiments - took such exclusive possession of my mind that I threw over gold speculation altogether'. She travelled to London to put her extensive knowledge at the army's disposal. At the time, disease was a far greater threat to soldiers than the enemy. More than 21,000 British soldiers died in the Crimean War, but only about 5,000 perished from battle injuries.

Yet, despite her expertise in treating cholera, she was turned down by the War Office, the Quartermaster-General's Department, the Crimean Fund, and Florence Nightingale's organisation. The undaunted Mary travelled to the Crimea at her own expense. She visited Nightingale, who had little practical experience of cholera, but her offer of help was refused. So Mary opened the British Hotel, fondly known as Mother Seacole's Hut, a few miles from the battlefront.

Here she sold food and drink to soldiers, using the earnings to finance the medical treatment she gave. Nightingale and her nurses were based in a hospital several miles from the front. But Seacole treated wounded soldiers from both sides on the battlefield, often under fire.

She was mentioned with affectionate admiration in many first-hand accounts of the war, tending the sick and wounded with warmth and good humour, and becoming famous for her fine meals. In fact, the most famous French chef of the mid-nineteenth century, Alexis Soyer, considered her an equal. Nightingale mistrusted her, mainly because she served alcohol at her hotel, and prescribed it to her patients. Nightingale aimed to change the system. Seacole simply wanted to make her 'sons' feel better.

The sudden signing of a peace treaty left Seacole with a large stock of unsalable provisions and unpaid debts. It was the only failure of her business career. She returned to England destitute and ill. The press highlighted her plight, and a benefit for her in July 1857 attracted thousands of people. She then published The Wonderful Adventures of Mrs Seacole in Many Lands, the first autobiography written by a black woman in Britain. She re-established herself in Jamaica in the 1860s, but then returned to England.

Queen Victoria's nephew Prince Victor, who as a young lieutenant had been one of her customers in Crimea, carved a marble bust of her in 1871. She also became personal physiotherapist to Alexandra, Princess of Wales, later the Queen of Edward VII. On her death in 1881, she left an estate valued at the then significant sum of over £2,500. In 1991, Mary Seacole was posthumously awarded the Jamaican Order of Merit, and in 2004, was voted the greatest black Briton ever.