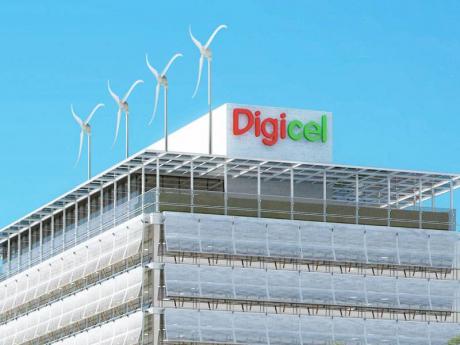 The top of the Digicel building being developed on the Kingston waterfront. - File

The deal, completed late last week, is expected to result in products that offer lower transaction fees than remittance services that can cost some 10 per cent on US$100 of transfer.

"Our investment in Boom Financial is a reflection of the strong value of the Boom service and the high-quality company that the team has built. Digicel's customers in the Caribbean and Central America receive more than US$5 billion a year in cash remittances from the US," said Colm Delves, CEO of Digicel Group, in a release posted on Digicel's website.

"Working with the Boom Financial team, we will seed a mobile banking ecosystem in these markets that eliminates the high fees and safety issues associated with cash remittances," Delves said.

Boom will use this investment to expand its product team in the US, as well as to increase sales channels and distribution in the US, Latin America, and the Caribbean, according to a Digicel statement on its website.

The funding will fortify Boom's status as the leading mobile banking brand for the unbanked and immigrant population in the region.

This round of financing adds to a previous round with participation from existing investors RRE Ventures and MATT.org and brings Boom's total funding to more than US$30 million to date.

Subscribers to Booms' service can use their mobile phones to make low-cost, bank-grade domestic and international money transfers and payments via a simple text message. Members can also make purchases and withdrawals at thousands of participating Boom merchants and at 100,000 Boom ATMs in more than 150 countries.

"Our partnership with Digicel further validates Boom as the premier US brand for mobile financial services for immigrants and their extended families across the Americas," said Bill Barhydt, CEO of Boom Financial.

"Digicel's extensive coverage in key Boom markets such as Haiti and Jamaica will accelerate our reach into these markets."

In May, Digicel announced its first digital merchant payment system which obviated the use of a bank account, credit card, nor a smartphone. The product, called Beep & Go, was launched in the Pacific nation of Tonga. The service was launched in partnership with VeriFone, and New Zealand-based currency exchange company, KlickEx.