Do You Have the Courage to Hold High Work Standards? 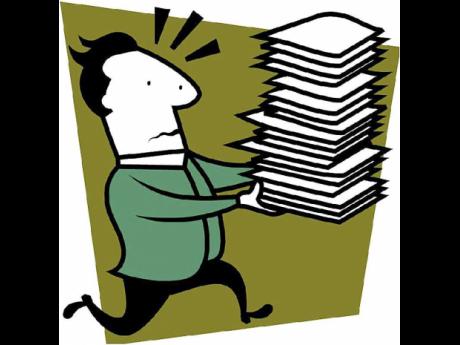 We Jamaicans love high standards in many spheres of daily life and we like to know that we are among the very best in the world. So, we accept without question that a sound method for distinguishing high performance in any field requires judgement that is strict, impartial and fair. However, in our focus on achieving high standards we often miss an important element.

Excellence is not only about striving to be the best; it's also about having a critical mass of people who are willing to "enforce" high standards on us all.

In my last column (A bligh we should not give, July 15, 2012) I pointed out that we don't confront each other when messages via email, text and voice fail to get a reply. A few people responded to the column by arguing that I didn't go far enough. They helped me see that we actually don't like being the enforcers of high standards anywhere in life.

We would much prefer to run the race than to be on the panel of judges. If we could, we'd choose to earn the grade rather than mark the papers.

We argue for respect from each other, but wouldn't dream of telling someone else when they have lost our respect.

It's no accident that our love of high standards translates into a love of competition, and this works in our favour in a number of areas.

We do well in sports, and especially those that focus on individual performance.

In addition, we have turned other areas like music and academic knowledge into areas of hot competition — witness the fervour we have for sound clashes in music, and Schools' Challenge, the GSAT and Spelling Bee in academics.

There are, however, areas of Jamaican life in which competition only makes things worse.

Running a company, governing a country and maintaining peaceful communities are all clear examples where cooperation and teamwork are much better techniques to use.

In the office, the company that pits employees against each other is one that will lose profits.

Microsoft's poor performance over the past decade is often attributed to its system of forced ranking — adopted from outside — in which the bottom 15 per cent are deemed to be failures and are forced to leave.

In the workplace, it's better to engender high standards for their own sake — the very thing that we don't like to do.

This reluctance results in managers that are too soft, or on the other hand, too hard. Their inability to skilfully hold employees to account
for high standards leaves workers:

2. Confused when unclear feedback becomes
the norm; and

3. Angry when people believe they are
being belittled.

By contrast, the
best high-school teachers I ever had were those who maintained the
highest standards. One teacher of physics and mathematics was an ardent
fan of the racetrack and taught us to emulate 'thoroughbreds' and not be
like ordinary horses. Another teacher once rejected a student's
homework because it was messy, and asked him rather pointedly: "Do you
see me dressing to come to class like
that?"

Obviously, these teachers weren't trained to
say these things, but their consistent call for excellence makes them
memorable.

Our workplaces need managers who can
perform the same feat, but what's lacking is a reliable way to learn
this skill.

Most companies fail to teach their
managers how to relate to their employees outside of the old and
inappropriate parent-child and teacher-student models, which are proving
to be less effective than ever.

We don't know what
works for managers who want to hold employees to account, but my sense
is that it varies by company.

To compound the problem,
we give managers very few opportunities to experiment with, and learn,
successful ways to confront employees.

Each firm needs
to identify the behaviours that produce excellence. Research tells us
that videotaped feedback and frequent, repetitive simulations can be
used to train managers to learn these skills, but there are too many
managers who are simply satisfied to give an employee a book to read
while hoping for the best.

The end result is
performance that we all deem to be inadequate.

The
achievement of high standards always requires good judges, referees and
umpires, but playing these roles in corporate Jamaica takes not only
skill, but courage too.

Francis Wade is a consultant
with Framework Consulting. Send feedback to
columns@fwconsulting.com