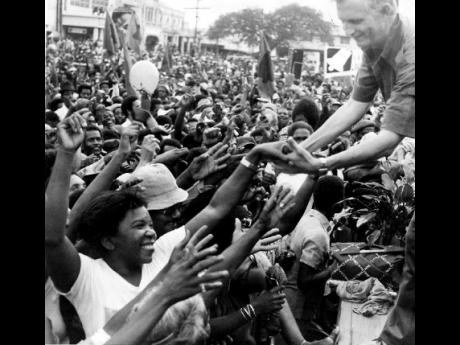 Opposition Leader Edward Seaga being wildly greeted by a section of the huge crowd at a JLP election rally at South Parade in downtown Kingston in 1980. - File 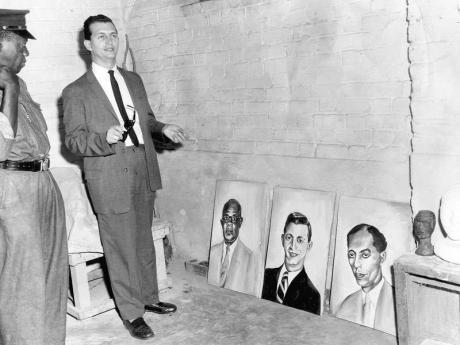 In this 1962 Gleaner photograph, Minister of Development and Welfare Edward Seaga views oil paintings of the governor general, himself, and the minister of trade and industry, Robert Lightbourne. The paintings were done by a prisoner at the General Penitentiary. - File
1
2

None has matched that record, let alone surpassed it, since Carl Stone wrote those words in The Sunday Gleaner of May 2, 1992. There is no living Jamaican anywhere in the world today, as Jamaica celebrates its 50th anniversary, who has contributed as much to Jamaica as Edward Phillip George Seaga. None. When Parliament meets on Thursday for a special commemorative sitting for Jamaica 50, special honour should be given to Edward Seaga for his incalculable contribution to Jamaica - if we truly had the stomach for non-partisanship and political maturity.

And at the Jubilee Village, there should be a special ceremony to honour Seaga for his incomparable contribution among political leaders - living or dead - to Jamaican culture. No other Jamaican politician has done as much to advance the culture of black people than Eddie Seaga. Not even Michael Manley, who had the arts in his genes, did as much for cultural development as Eddie Seaga. Mr Culture himself, Rex Nettleford, used to say to me, "Not even Michael was as easy to spend on culture as Eddie. Anything I asked for, I would get."

One of the most dastardly and vicious lies ever perpetrated in our post-Independence political history is the one that Seaga was a racist. That this nasty piece of political propaganda could have been believed by so many was a tribute to the masterful demonisation job done on Seaga - and the fact that Seaga was often his own worst enemy because of his irascibility, bellicosity, obnoxiousness and plain unlikeability to many outside of Tivoli. He was a man you love to hate.T

The view that Seaga was a racist and an elitist who was a puppet of the Big Man and an enemy of black people should be finally and permanently eradicated. I hope the upcoming 50/50 academic conference by the Sir Arthur Lewis Institute of Social and Economic Studies will take the opportunity to do so, and make atonement for many from the University of the West Indies (WI) who played a major part in that mischaracterisation of Seaga in the 1970s. Some serious, searching and dispassionate study must at last be done at the UWI to set the record straight on Seaga in post-independent Jamaica.

Academics and intellectuals know Manley was misunderstood and mischaracterised by many. But the academy has generally corr-ectly positioned him. It has not done the same with Seaga, and this grave and unforgivable wrong must be corrected. This jubilee must also be an atonement!

Let me say straight off the bat that Seaga's role in post-Independence Jamaica has not been angelic. Yes, he has been responsible for some of our finest and most laudable achievements, economically and culturally, but politically he has been a major player in garrison politics and tribalism, and must share blame for our decadent political culture.

Whenever I have praised Seaga, I have never failed to mention his contribution to garrison politics. When Seaga talks about our failings in 50 years, he must remember that he has played a major part in that, with his misguided stewardship of Tivoli Gardens, the mother of all garrisons and a former centre of transnational criminality and terror. Also, he has a lot to answer for with his political behaviour in the 1970s. No one needs to lecture me about Seaga's transgressions. I don't wear rose-coloured glasses where he is concerned.

But we have been too eager to highlight his defects while being frugal with the truth about the man. Our media, in particular, should be ashamed that so many could ever have been caught in the web of lies spun about Seaga, especially that atrocious slander about his being anti-black and elitist. Such damn nonsense should have been dismissed for what it was in the 1970s and beyond, and the 'My Leader Born Ya' vulgarity should never have gained traction if we had more professional, impartial journalists in the 1970s.

How can a man who gave up his American citizenship to live here among inner-city people in Salt Lane and among peasants at Buxton Town be termed an elitist? It was Seaga who studied black people's folk religion here; Seaga who took time to understand Revivalism and Pocomania, the despised and once-outlawed indigenous African religious retention.

When the police were harassing Mallica 'Kapo' Reynolds, confiscating his works of art and locking up other Revivalists as obeah men, it was Seaga who took to the press to blast them and make the police ease up on their oppression of black people exercising their freedom of religion. Socialists and communists were not doing that.

Eddie Seaga took a demonised religion of the black masses, revivalism, and documented it as an authentic religious form, giving international recognition to this despised religion. When he was prime minister, he scandalised 'respectable' uptown Christians and fundamentalists by having a revival table at Jamaica House. That was never done by any 'born ya' political leader.

It was Seaga who brought back the remains of our greatest and most influential Jamaican, Marcus Mosiah Garvey, and it was he who created Jamaica's highest national award, that of National Hero, making Garvey our first. This was the man who was the racist! As I wrote in a piece on April 30, 2006: "For a leader who was not 'born ya', he has done more to advance the cultural interests and heritage of black Jamaicans than every other 'born ya' political leader in this country. The creation of Things Jamaican to market the craft of our people; the establishment of the Cultural Training Centre, where the range and variety of art forms found full expression and where young minds are moulded, are signal achievements."

Seaga's creation of Jamaica Festival and his establishment of the weeklong celebration of Jamaican heritage, culminating in National Heroes Day, shows his depth of commitment to black people's culture. It was in 1967 that he established the Jamaica Journal to document and celebrate Jamaican (black) culture. He moved people like Kapo from having to be running from police to being an internationally recognised intuitive artist and celebrity. And how could Miss Lou repay Seaga for his promotion of her?

The first hit song to be recorded on vinyl was done by Seaga through his company, West Indies Records Limited, enabling Jamaican records to be played on a long-life basis. No industry has put Jamaica on the map as reggae music has. Bob Marley is the most
famous Jamaican. Seaga was at the foundation of Jamaican
music.

He was also responsible for moving ska from
downtown to uptown. Byron Lee used to like to tell the story of how
Eddie invited him downtown to hear ska and then encouraged him, with his
uptown band, to take that beat to his 'respectable' audiences. That's
how ska went uptown and eventually how Jamaican music went
international. Byron Lee was inspired by Seaga to create Jamaican Ska
for Jamaica's Independence in 1962. Ska was known as bluebeat in
England, but had no distinctly Jamaican identity. Seaga changed that
with Jamaica Ska. (Remember the
song?)

Rex Nettleford used to talk about how Eddie
helped him when he started the National Dance Theatre Company (NDTC) in
1962. Anything indigenous; anything to promote black people's culture,
Seaga was big on it. We have always treated Seaga as an outsider. But
none has been more authentically Jamaican - and more 'black' - than
Eddie Seaga. No political leader has had a deeper appreciation of black
culture than Edward Seaga.

The view that because he
was pro-capitalist and anti-communist he was elitist is an irredeemably
naive view. Seaga has always been a passionate Jamaican nationalist.
That's why he so stridently opposed communism, which he felt
(erroneously) Manley was embracing. But long before Manley articulated
his vision of equality, Seaga, in a Legislative Council presentation of
1961, gave his famous "haves and have-nots" speech. Seaga was never an
elitist. He started his political career fighting for equality and
justice. He just never had the ideological prism that Manley
had.

Seaga was more a pragmatist but no less committed
to the upliftment of the black masses than Manley. Manley, in my view,
had a far more sophisticated view intellectually and understood that
Seaga's methods of uplifting poor black people were doomed to fail
without a New International Economic Order and progressive international
alliances.

But Seaga presided over periods of
economic growth which eluded Manley. He built institutions that have
made a profound contribution to national development. Seaga played a
major role in the localisation of the Jamaican financial
sector.

A special place of honour should be reserved
for him as we celebrate Jamaica 50. His achievements in either culture
or economic management would be enough to catapult him above every other
living political leader - by far - let alone in both
areas.

No Jamaican political leader has had as much
courage, backbone and political stamina as Edward Seaga. Seaga was his
own man. No big man, no member of the 21 families, intimidated him. He
was too arrogant for that; too messianic in his personality. That's why
the moneyed classes dropped him, for he was not their water boy. He told
the International Monetary Fund (IMF) to get lost and to come back with
fresh eyes.

The following statement in his book,
Edward Seaga: My Life and Leadership (Volume One)
aptly captures his nationalist spirit: "The same brainwashed mentality
that proclaimed everything from the great house to be good and better
dictated that imported investment, imported socialism, imported
federalism, imported IMF diktats and imported globalization are all good
and better. We must determine what is good or we will become modern-day
slaves to new masters in a new colonial regime, and true independence
will be a fiction." As we celebrate Jamaica 50, I say, 'Hail the man,
born Jamaican!'

Ian Boyne is a veteran journalist.
Email feedback to columns@gleanerjm.com and
ianboyne1@yahoo.com.