The London Olympics: capitalism in action 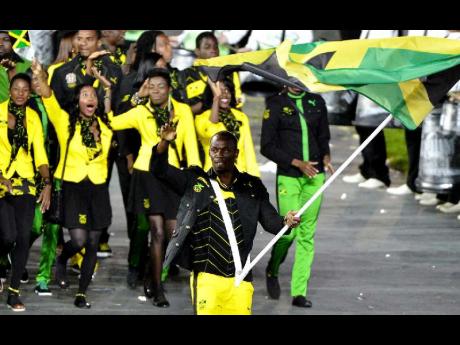 Jamaica's Usain Bolt carries his country's flag during the opening ceremony of the 2012 Summer Games at the Olympic Stadium in London, England, last Friday. - AP

In a recent article for 'Reason', Ira Stoll praised the 2012 Olympics - not only in the body but the title itself - as a 'Triumph of capitalism' (July 23, 2012). He's entirely correct - but not for the reason he thinks.

Stoll's characterisation of the Olympics as "capitalist" seems to reflect their funding "largely not from governments but from the private sector". Oh, and also the fact that "private property" rights (of a sort) are being traded:

"NBC (not a Cuban or North Korean television company but an American one) agreed to pay a reported US$4.38 billion for the rights to broadcast four Olympics, a sum that is itself made possible by NBC's sale of commercial sponsorship time to advertisers. Even 'broadcast' is now a misnomer, as the Games are streamed on the Internet and available on cable channels."

Stoll is typical of the kind of "libertarian" for whom "private property rights" and large "private" revenue streams - whatever their source or legitimacy - are the be-all and end-all.

If you define 'capitalism' simply as an economy in which most activities are carried out by private corporations and serve as sources of profit for them, Stoll's entirely correct. And if, like me and the other left-wing market anarchists at Center for a Stateless Society, you define 'capitalism' as a system in which the State subsidises big business, protects it from competition, and enforces the artificial property rights and artificial scarcity rents from which it derives its profit, the Olympics also fits the bill.

Whatever amount of private funding the Olympics gets, it also gets a pretty hefty chunk of change from taxpayers; and the core functions and infrastructure on which private investment piggybacks are mostly government-funded.

The Olympic Delivery Authority (ODA) is a statutory corporation, accountable to the Department for Culture Media and Sport, created to oversee development of the Olympic Park and associated transport infrastructure. The ODA's budget - in the billions of pounds - comes from a funding package agreed on by the mayor and City of London.

Of course, this state funding (from both tax revenue and the National Lottery) doesn't preclude the fact - no doubt comforting to Mr Stoll - that it passes through some corporate hands along the way. The actual work is carried out by a private contractor - namely, CLM, a parasitic consortium of CH2M Hill, Laing O'Rourke and Mace.

Stoll's account of the money shelled out for 'broadcast rights' is also quite telling as to what he means by 'capitalism'. All those billions NBC is paying are an investment with what amounts to a state-guaranteed return. The London Olympics are one of the most heavily copyright- and trademark-protected events in human history.

'Broadcast rights' are absolutely meaningless, unless you presuppose a state-granted monopoly on the right to distribute information. And you can bet your bottom dollar all that streaming content on the Internet will be proprietary, as well.

The 'intellectual property' stupidity goes beyond the point of self-parody. Like Rupert Murdoch, who's befuddled by any technology since 1970, the Olympic Committee actually thinks it can regulate the terms on which people link to them. See, you can't link to their website (this website right here http://london2012.com) if you say anything unkind about them. Their 'intellec-tual property' is apparently retroactive to include all prior cultural or historical references to the Olympics; they even went after a restaurant called Olympic Gyros.

And, of course, the Olympics are surrounded by the kind of police statism run amok for which London has become famous over the past two decades: Rooftop SAM launchers, Twitter censorship, public surveillance cameras, and armoured riot cops on the ready. You'd think there was a WTO or G-8 meeting.

So if your idea of 'capitalism' is not the free market, but a system in which the State socialises costs and risks and privatises profit, me and the market anarchist comrades at C4SS are entirely in agreement. The only difference is that what Stoll is praising so effusively is exactly what we're fighting against.

Kevin Carson is a senior fellow of the Center for a Stateless Society (c4ss.org) and holds the centre's Karl Hess chair in social theory. Email feedback to columns@gleanerjm.com.