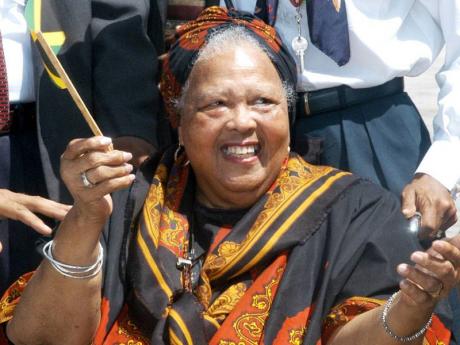 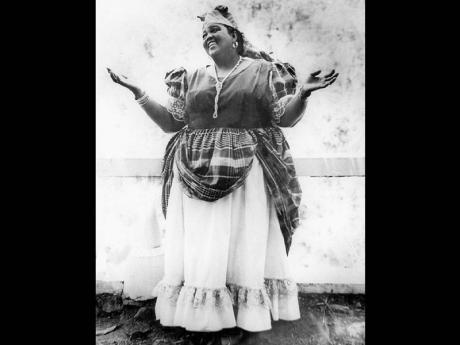 Louise 'Miss Lou' Bennett-Coverley is the most universally loved personality this nation has ever produced or likely will ever produce, engendering unabashed feelings of pride and affection in Jamaicans of all ages, colours, classes and creeds. For over 50 years, she tirelessly championed Jamaican folk customs on stage, radio and television. Miss Lou is also the most popular poet in this island's history, outselling all others put together.

Her impact on the national psyche was perhaps even more important than her artistic legacy, for she almost single-handedly gave Jamaicans pride in their cultural heritage. In musicologist Marjorie Whylie's words:

"All of us are the inheritors of her groundwork. Folk music only gained respectability after Louise came back from London and sang Rookumbine on RJR."

Her islandwide travels gave her an unsurpassed knowledge of native folklore. She collected and studied folk songs, ring games, Anancy stories and riddles, becoming a primary resource for scholars and artists. Whylie called her "the most generous soul I know ... always so ready to assist with material or contacts or pointing you in a direction for tracing further material ... a casual social visit with Louise ... would make a good anthropological study."

As her Norman Manley Award for Excellence citation noted:

"It is this truth grounded in her faithful observation and a genuine empathy with Jamaican folk life which makes Louise Bennett stand way above all her colleagues ... . Her deep knowledge of Jamaica has helped to give her literary and theatrical work an authenticity that few other Jamaican artists have achieved. Many of our other significant artists, working in their various media, are accessible only to an elite ... . Louise Bennett has achieved an excellence while reaching the entire society. But she does not flatter us. She is forever exposing our pretenses, our idiocies, our cosmic disproportions. She measures us against the values of common sense, of sanity, of reason; and yet in her compassion does not seem beyond us all. She speaks not so much to as for the whole Jamaican society."

And as Rex Nettleford said:

"... Those who indulge her rumbustious abandon and spontaneous inducement of laughter will sometimes forget that behind the exuberance and carefree stance, there are years of training - formal and informal - as well as this artist's own struggles to shape an idiom."

It was Miss Lou's insistence on the inherent worth of Jamaican expression that established in the populace a respect for their language and tradition - the belief that 'patwa' wasn't merely corrupted English, but a creation of immense vitality and humour. In her own words:

"Some thought Jamaican-English was vulgar, out-of-order language. It came out of the African heritage and at that time anything African was bad: hair, colour, skin, language, music. But I thought it was fascinating. Everything had a rhythm. It was a creation of the people. One reason I persisted in writing in dialect in spite of the opposition was because nobody else was doing so, and there was such a rich material in dialect that I felt I wanted to put on paper some of the wonderful things that people say in dialect. You could never say 'look here' as vividly as 'kuyah.'"'

Her dialect performances were the direct precursors of deejay music and dub poetry. Tony Rebel, who uses Jamaican dialect as effectively as anyone in reggae, acknowledges Miss Lou as his greatest influence. While Luciano puts it this way:

"She has worked forward into my consciousness that I can be proud of my culture and proud of myself."

No single individual has been more responsible for the Jamaican nation's emancipation from colonial mental slavery.

Many people associate Miss Lou primarily with comedy. But while we rightly treasure those who bring the gift of laughter, we should not forget the serious side of Louise Bennett. Only someone with a very strong sense of racial pride and self-belief could have withstood the torrents of criticism levelled at her when she first championed the language and culture of her people.

Jamaicans today are happily at ease with themselves and their customs, but it took a true 'lion heart' to speak out as she did at the height of 'only white is right' colonialism. And though in much of her work she did 'tek kin teeth kibber heart bun' (Take skin teeth (a smile) cover heartaches), in poems like 'Dutty Tough' she addressed the issues of her day as seriously as any reggae artist and deejay ever has.

Sun a shine an pot a bwile, but

Things no bright, bickle no nuff

In Tony Rebel's words, "Miss Lou was a sort of female Marcus Garvey." She was a giant on whose shoulders all reggae artistes and dub poets now stand.