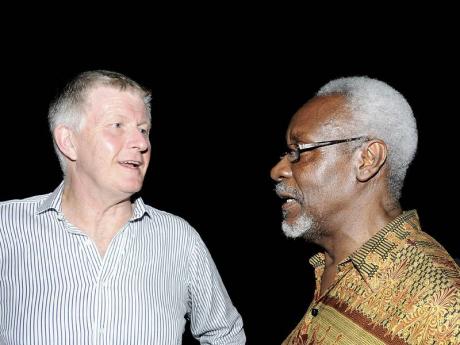 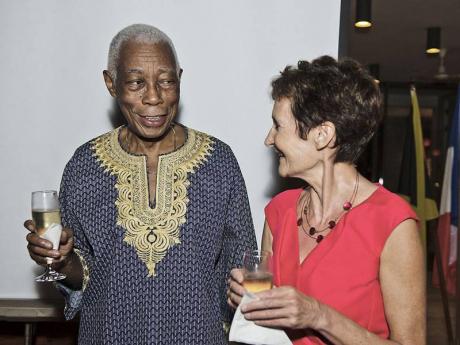 My dears, it's all about Jamaica's 50th Independence celebrations and then some, as many international dignitaries are now arriving for the Grand Gala celebration. And dears, y'all know that included in the Jamaica 50th celebrations is the country's participation in the 2012 Olympic Games now under way in London.

If ever there was ever a time to rally round the black, green and gold (and there always is) now is most definitely that time, as we toast this land of beauty and bounty and its many famed sons and daughters, who brought us here and those who continue to inspire us, as we move forward.

And so, luvs, let the festivities begin, and in earnest as we salute our Independence jubilee and our athletes who seek to fly our colours in London at the Olympics.

And speaking of the Olympics, last week Friday, British High Commissioner Howard Drake and his wife, Gill, opened their official residence, on Trafalgar Road, and hosted a post-Olympic opening gala reception that was quite the do, and then some.

Dears, the world and his wife were out in attendance, and it made for one fabulous do.

And speaking of things diplomatic, luvs, loads of activities on the diplomatic scene here. From the state visits of the Nigerian and South African presidents, there have been loads of farewell functions for outgoing ambassadors. But there was one that was all about a country's independence, and that was the Bastille Day celebration hosted by new French ambassador, Ginette de Matha.

Dears, the affair was style perfect and nothing but, as the ambassador and her staff dished out French élan like a masterclass and it made for one of the season's best receptions.

On Saturday the 4th, the fab Terri Salmon; Kimeshia Bygrave, in Montego Bay, celebrates the Big Three-Zero. The lovely Dr Sacha Shaw-Cuthbert, in Florida, the daughter of former Finance Minister Audley Shaw, will make it a very special day of partying.

Monday, August 6 is Independence Day, and with Jamaicans everywhere celebrating Jamaica's 50. For a special few, it will be a double celebration, as they mark their birthday as well. Among those are historian Donald Lindo; guitarist Earl 'Chinna' Smith; the iconic Ruth Ho-Shing; the fab Simone Haynes-Khouri; model Trevon Salmon; Rusheen 'Hedo' Harris, the fabulous Hedonism II, group sales coordinator at Hedonism II in Negril. Also Denise Thompson Shearer, now in Orlando, Florida; and Patrick Callum, now in the Big Apple, will make one very special day of celebrations.

And next Thursday the 9th, the celebrated gourmet chef and songbird Suzanne Couch; the lovely Dionne Duncan; the lovely Susan Price, in May Pen, Clarendon; the gorgeous Keisha Clarke, in Montego Bay; the charming Claudette Mitchell, in Buff Bay, Portland; the ultra-gorgeous Regine Knowles, in South Beach, Florida, and the fabulously hot Cheryl Hill, now in Lake Park, Florida. The fab Shanisa Bergeron in Round Rock, Texas; the lovely Nicole Chireau in New York, the lovely Sue Weis Herbst in Bennett, Colorado; and the fab Tarah Fleming in San Rafael, California, will be among the beautiful people celebrating.

Many happy returns all around, with champagne toasts and beluga treats.

And speaking of celebrations, happy anniversary wishes to the fab couple André Cooper and his wife, the fabulous Chloe Francis-Cooper, in Ocho Rios, St Ann, who celebrate their very first wedding anniversary on Independence Day.

And mon congrats to Marlon and Terrie Creary, who celebrate their 13th wedding anniversary this week with a family outing to Disney World, with sons Tariq and Tyrel.

Congrats to Kevin and Cecille Levy in Negril their 16th wedding anniversary tomorrow.

Time to break out the bubbly all around, as we laud Jamaica, land we love.

And so we say, let the partying begin!